Rising silver prices have helped and hindered US Mint silver products, based on the latest sales figures from the bureau. 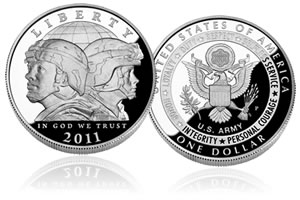 The silver coins contain 0.773 ounces of the metal, giving them a melt value of $34.86 at the current spot price of $45.07 an ounce. That is still $20 less than the least expensive option, but their premiums appear more reasonable now versus, for example, when the Army coins launched on January 31 and silver was at $27.75 an ounce.

On the flip side, all US Mint silver sets stepped back in their weekly gains. But then, higher silver prices resulted in the sales suspension of two of them during all of last week. The Mint’s final two silver sets were suspended this past Monday. The four sets have been taken offline as their melt values were approaching their prices. Unless the US Mint reprices the silver sets and returns their availability soon, next week’s numbers will reflect only adjustments for returns and cancellations. Their quick return seems unlikely, however, given that silver prices continue to spike higher.

Debuting this week are sales figures for the Grand Canyon Quarters Three-Coin Set. The set was released on Wednesday, April 13. By Sunday, April 17, collectors ordered 12,418. That was the best opening for the three-coin sets ever. Past openings include Hot Springs at 10,684; Yellowstone at 11,115; and Yosemite at 11,441.

I purchased a few 2011 silver proof sets before the mint suspended sales. Looking at the coins, there are some that seem to have a “brushed finish” on the “frosted” part and some that have “micro dots”. This is appearent on the Presidential Dollars and the quarters. Does anyone have information on this?