American Eagle bullion coins took center stage in the latest batch of US Mint sales figures. Their week-over-week sales levels improved for all but one offering. 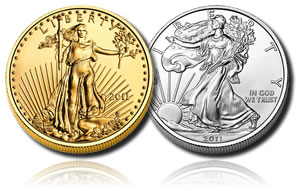 Seventeen US Mint numismatic products also outperformed their prior weekly gains, but the general sales trend for most collector coins and sets was down. Several were actually yanked back, registering lower totals than a week ago.

The one-quarter ounce American Gold Eagle remained unchanged at 38,000 for the year. It was the only American Eagle bullion coin which failed to rally higher. American Silver Eagles were coveted the most. They enjoyed a weekly US Mint sales increase of 697,500 against the previous 652,500. More impressively, their year-to-date sales topped the 12 million milestone.

2011 Medal of Honor $5 gold commemorative coins were the most recognized of the Mint’s numismatic over-performers. Their proof and uncirculated weekly sales figures climbed a combined 1,230 as compared to the prior 1,062.