The US Mint released seven products last week which included ten different coins. Rarely are so many offerings issued in such a short time span. 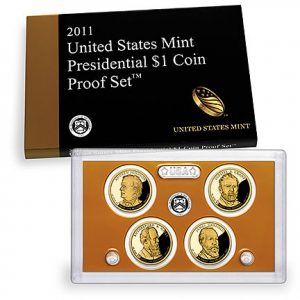 The US Mint sales figures this week include the debut performances of the four 2011 Medal of Honor Commemorative Coins, the 2011 Andrew Johnson Presidential Dollar rolls from Philadelphia and Denver, and the four-coin 2011 Presidential Dollar Proof Set.

The 2011 Presidential Dollar Proof Set went on sale for $19.95. It contains proof presidential dollars honoring Andrew Johnson, Ulysses S. Grant, Rutherford B. Hayes, and James Garfield. Between their release on Tuesday, February 22, and Sunday, February 27, collectors ordered 163,129 sets. That was substantially lower than the debuting 2010 Presidential Dollar Proof Set which came in at 224,426 with fewer days (their debut sales period was from Thursday to Sunday). However, the 2010 set had a more attractive price tag at $15.95 ($4 cheaper). Perhaps more important, it included the very popular Abraham Lincoln Presidential Dollar.

Philadelphia or Denver minted Andrew Johnson Presidential rolls are available from the US Mint for $39.95. They were released on Wednesday, February 23. Their sales debut to Sunday came in at 23,211 (P) rolls and 22,525 (D) rolls, for a total of 45,734. The amount was substantially lower than the previous Presidential rolls which debuted at a combined total of 67,651. But then again, the rolls included Abraham Lincoln $1’s and each was $4 less at $35.95.

The collector coin sales figures above have an "as of date" of February 27, 2011.

Please, you did not state what year for the Native American Dollar Coins ? Please and thank you