2011 sets continue to dominate US Mint collector product sales. That is hardly surprising as the Mint has released its three most popular annual sets in two-week increments since early January. 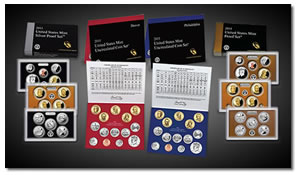 The annual proof set and mint set are a popular combo, so perhaps collectors held onto their cash until the release of the uncirculated 2011 Mint Set so they could order both in one fell swoop. The 2011 Mint Sets just came out last week on February 8. They debuted at 191,391, which was a bit weaker than last year’s opening.

Rounding out the Mint’s top three annual sets for the year is the 2011 Silver Proof Set. Its total picked up by another 24,630. The sets will hit 280,000 by Sunday if the buying pace remains the same.

The next biggest numismatic sellers were the new 2011 US Army Commemorative Coins. Their sales debut was published in last week’s report. They are just one day shy of having two full weeks of sales data under their belt. The proof commemoratives — the clad, silver and gold — remain the most popular by a more than 2-to-1 margin. Nearly 165,000 coins have been purchased across each of the six available options. Break outs per coin are in the sales tables below.

In taking a quick glance at US Mint bullion coins, the fractional American Gold Eagles are off to the races. All sizes showed gains, with the smallest one-tenth ounce Gold Eagle jumping the most in last seven days by scoring an increase of 95,000.

The collector coin sales figures above have an "as of date" of February 13, 2011.

“What is a bit surprising is the 73,789 weekly advance of the 2011 Proof Set. ” It’s not surprising to me, as I waited until all three sets were available to order, and paid one shipping and handling charge, instead of three!