The United States Mint has unveiled the final design images for the 2011 First Spouse Gold Coins featuring the wives of Presidents Johnson, Grant, Hayes, and Garfield. These men will be depicted in 2011 on Presidential $1 clad coins released into circulation while their spouses will be honored on $10 gold collector pieces sold by the US Mint directly to the public. 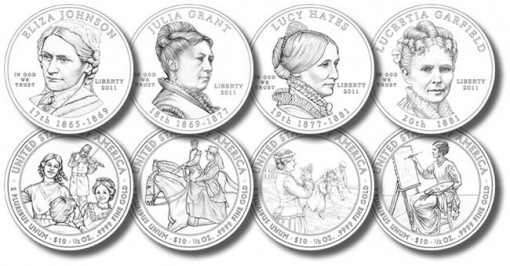 The coins will be eighteenth through the twenty-first released in the spousal series which was introduced in 2007.

The US Mint will issue collector proof an uncirculated versions. Each is struck in 1/2 ounces of 24 karat, .9999 fine gold. The new designs also will be featured on 1-5/16″ bronze medals.

The prices of the coins will depend on the prevailing market price of gold during the time of their release. The First Spouse Medals will be $7.95 each, according to the US Mint 2011 product schedule.

The following includes images of each first lady coin, their expected release dates, if available, and design information as provided by the US Mint. Images may be enlarged with a click.

The reverse design, by Gary Whitley, depicts three children dancing and a Marine Band fiddler playing at the children’s ball that was held for President Johnson’s 60th birthday. The sculpting was completed by Phebe Hemphill.

The coins and medal currently have a "To Be Determined" release date.

Donna Weaver designed the obverse image that is seen on Julia Grant First Spouse Gold Coins. Inscriptions include JULIA GRANT, 18th, 1869-1877 and 2011. It was sculpted by Michael Gaudioso.

The coins and medal are expected to be released on June 2, 2011.

The obverse of the Lucy Hayes First Spouse Gold Coins was designed by Susan Gamble and includes the inscriptions LUCY HAYES, 19th, 1877-1881 and 2011. It was sculpted by Don Everhart.

This reverse depicts Lucy Hayes’ participation in the first Easter Egg Roll held at the White House. It was designed by Barbara Fox and sculpted by Joseph Menna.

The coins and medal are expected to be released on September 1, 2011.

The reverse design depicts Lucretia Garfield’s interest in art and features her painting on a canvas with brush and palette in hand. It was designed and sculpted by Michael Gaudioso.

The coins and medal are expected to be released on December 1, 2011.

As the above images show, each reverse also features the inscriptions UNITED STATES OF AMERICA, E PLURIBUS UNION, $10, 1/2 OZ, and .999 FINE GOLD.

The US Mint issues First Spouse Gold Coins on the same schedule as the Presidential $1 Coins issued honoring the Presidents.

can’t wait for Mrs Obama’s coin. I bet it will be a hot item

I’m not certain, but I think you have to be dead to appear on U.S. coinage! In that event, I’ll bet Mrs. Obama will want to wait for awhile to appear on the coin!