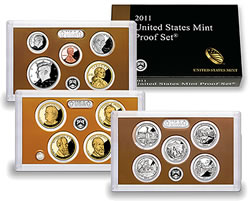 The latest United States Mint coin sales figures indicate a slower start for the 2011 Proof Set which includes numismatic proof versions of the fourteen coins that will be in circulation this year.

That is the weakest start in the past several years despite its long first reporting sales period. As an example, the 2010 Proof Set started near 300,000 during its first four days.

There could be a number of factors as to why sales have started slower, ranging from its earlier than normal release — its been at least a decade since the proof set launched so earlier in the year, marketing material not yet sent out to customers letting them know it is available, and collectors realizing they have many more months before they make a purchase.

The older 2010 Proof Set is still available, and expectations are that it will remain so until later this year. Their weekly sales climbed 5,378 to 1,051,196. It was the second best performing numismatic product last week.

Both 2010 and the 2011 Proof Set may be purchased directly through the US Mint’s online store at:

The most important cause for the sales decrease is not mentioned: the announcement of the sweeping price increases at the mint has forced many collectors to stop collecting.