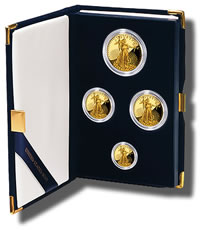 With its disappearance, collectors will no longer have a direct path from the US Mint to purchase the one-ounce and one-half ounce sizes as these sold out earlier (the half ounce on December 22 and the one-ounce at the end of October).

The four 22-karat 2010 Gold Eagle Proof Coins went on sale October 7, 2010. Opening demand soared past prior-year issues with collectors handing over $47.3+ million to get them within the first four days. Interest in the gold pieces eased somewhat during November around the time their prices went up (November 10) before picking up again in December.

The first two sell outs came as a bit of a surprise, but for different reasons. The one-ounce because demand jumped higher-than-expected toward its end and the half-ounce because the US Mint stopped selling them when their sales were still nearly 5,000 away from their expected 15,000 product limit. It would seem the same thing has happened with the four-coin set, which indicates that the remaining two coins may not be available for long either.

The following table provides the latest available US Mint sales figures for the coins. For reference, the original published product and mintage limits are also listed for each coin. As mentioned, to date it would appear the only proof option to follow the initial product limit is the one-ounce size.

Mike Unser - January 15, 2021 14
The United States Mint will strike and sell renditions of Morgan and Peace silver dollars to mark the 100th anniversary of their switchover. Specifically, Public...