Answering a demand placed upon it by the public, the UK Royal Mint has issued a commemorative coin dedicated to the celebrated musical figure of John Lennon. 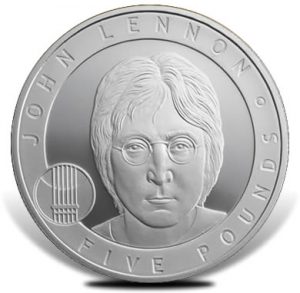 The John Lennon Commemorative Coin was struck as part of the Royal Mint’s series known as the “Great Britons” which honors famous British citizens of the past. Noted names such as William Shakespeare, Sir Winston Churchill, Charles Darwin and Florence Nightingale have all been included as part of the series.

However, making the John Lennon Commemorative Coin extremely unique is the fact that his inclusion was in response to a public vote campaign initiated by the UK Royal Mint asking for input on the next person to honor. It marked the first time the Mint requested such public participation in a coin selection and it proved extremely popular. Over 30,000 votes were cast in total.

John Lennon was by far the most chosen icon with over 92% of the total votes cast in his favor. A huge online swelling of support for the former music maker included internet fan groups and social sites that propelled his name to the top.

Born in 1940 in Liverpool, England, John Lennon was one of the founding members of the rock band known as The Beatles which rose to stardom in the 1960’s. By the mid-1970’s, Lennon pulled himself from the music scene for five years to spend more time with his family, but was set to make a return in 1980 when he was murdered in New York City. His influence on the pop culture and music world of the time cemented his inclusion as one of Great Britain’s most celebrated entertainers.

"It’s entirely fitting that John Lennon has been chosen by the public in what would have been his 70th year," stated director of commemorative coin at the Royal Mint Dave Knight. "The massive proportion of the vote he received shows clearly just how much his untimely death still resonates with the nation."

The coins issued to honor Lennon feature a long haired portrait of him on the reverse as designed by Danuta Solowiej-Wedderburn with the obverse showing Ian Rank-Broadley’s image of Queen Elizabeth II of England. Each is considered legal tender of the country of Alderney.

Three different varieties of the commemorative coin were struck by the UK Royal Mint. A special edition sterling silver proof with a mintage cap of 5,000 was struck and sold out within a week from the Mint. These silver strikes are now only available on the secondary market.

Offering those who missed the opportunity to obtain one of the silver Lennon coins another chance to get a Lennon pieces, the Royal Mint produced a cupro-nickel proof John Lennon commemorative coin for £24.99. (See Mint product page.) These coins will be struck through December 8, 2010, to commemorate the 30th anniversary of Lennon’s death. Orders placed prior to that point will be guaranteed for delivery before Christmas. No orders for the cupro-clad proof coin will be accepted after December 8th.

Finally, the Mint plans to produce a single 24-karat gold version of the coin to be presented to the John Lennon Estate.

Do John Lennon Commemorative Coins come in Gold, Platinum, or Palladium as well as Silver? Do any other nation beside U.K. mint John Lennon Coins?

We were delighted to see that you stated the country of issue as Alderney.
In earlier press releases and media reports, only 2 out of 358 mentioned the issuing country, which would leave most people incorrectly assuming this was a British coin issue.
Well done!
We published a page about it:
http://www.taxfreegold.co.uk/abcnewsmediamisinformation.html