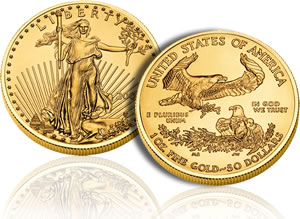 The tally includes the one ounce Gold Eagle as well as the three fractional 1/2 ounce, 1/4 ounce, and 1/10 ounce sizes.

Across the board, all four of the 22-karat gold coins showed improvement from August numbers. While the increase was not a dramatic feat since those sales were at their lowest level in over two years, they are notable as summer buying actively is typically slower for all American Eagle coins.

September 2010 Gold Eagle demand was strongest for the one ounce coins. 82,500 were ordered, marking an increase of 43,500 from the 39,000 sold in the prior month. Still, the monthly level ranks as the third lowest this year.

Fractional demand lifted Gold Eagle bullion mintages. Leading the pack in percentage increase was the 1/4 ounce strikes, coming in at 6,000 to triple the number sold in August. 1/10 ounce Gold Eagles also showed a marked improvement. 30,000 were sold in September, doubling the amount from the previous month. However, these tallies are far shy from the numbers posted in June, the first month in which the fractional sizes were available.

U.S. Mint gold coin demand may be somewhat affected with the release of the numismatic 2010 Proof Gold Eagles. The collector versions have not been available since 2008. Owing to a large demand for the bullion strikes, which the Mint is currently required by law to strike to meet demand, the 2009 proofs were canceled (the first year in which they were not produced since their debut in 1986).

For much of this year, it appeared that the 2010 proofs could meet the same fate, but two factors worked favorably toward their release. First, investor demand for bullion gold products retreated as compared to 2009. Second, the Mint has been working with its blank planchet suppliers to increase the number of available coins blanks — the precious metal discs used to create coins.

The 2010 Proof Gold Eagles will launch Thursday, October 7, 2010. Just like the bullion versions, there will be four different sizes available — one ounce, 1/2 ounce, 1/4 ounce and 1/10 ounce. A special 4-coin proof set including all four coins will also be issued.

One-ounce Gold Eagle bullion coin sales are sitting at 11,000 for the first five days in October.