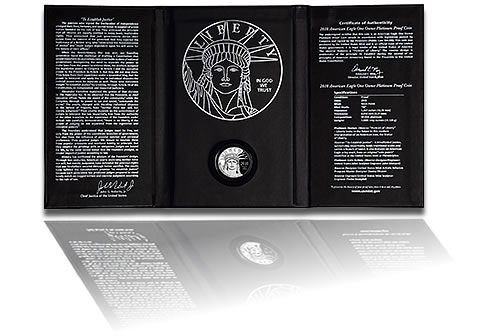 The list feature has become a staple for newly sold out products, providing an opportunity for the Mint to fulfill standby orders if older orders are canceled.

"The number of orders we have taken meets the maximum limit for the 2010 American Eagle One Ounce Platinum Proof Coin," the Mint notice states. "You may still place an order for this product, which will go on a waiting list. If a product becomes available due to an order cancellation, we will fulfill orders from the waiting list on a first-in, first-served basis."

The standby list could be in affect for days, or weeks, before the Mint officially classifies the coins as "sold out," and moves them to their no longer available product page.

Helping their sales further was a $100 price drop on Wednesday, after the Mint adjusted its numismatic gold and platinum coin prices following changes to weekly London Fix precious metals averages.

The 2010 proof Platinum Eagles have proven to be more popular than last year’s issue, which also sold out quickly. Their lower 8,000 mintage was gone in just over one week’s time.

too bad minorities and blacks never heard the word Platinum

[…] Mint continued to accept new orders between Thursday and Monday, but those were added to a standby list — fulfilled only if an older order was canceled or failed to process. This guaranteed that […]