The American Numismatic Association’s 2010 Boston World’s Fair of Money offers some of the world’s most beautiful and famous coins, the nation’s top numismatists and a venue in the heart of one of America’s most historic cities.

Held Aug. 10-14 at the Hynes Convention Center, the show features a spectacular Museum Showcase, the famous Ship of Gold display, more than 1,100 dealers and vendors, 18 mints from around the world, and educational programs for experts, casual collectors and numismatic newcomers.

The ANA Museum Showcase is a dazzling display of numismatic rarities. Highlights include:

The Ship of Gold exhibit displaying Gold Rush-era sunken treasure from the 1857 shipwreck of the SS Central America will be in Boston courtesy of Monaco Rare Coins. 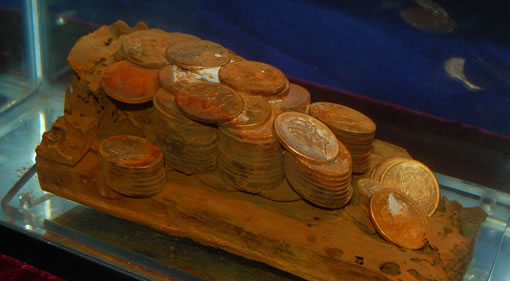 CLICK IMAGE TO ENLARGE: The remains of a wooden cargo box with approximately 110 gold coins as they were found on the ocean floor will be among the more than $10 million of recovered California Gold Rush-era sunken treasure from the SS Central America that will be publicly displayed in a “Ship of Gold” exhibit. (Photo credit: Monaco Rare Coins)

Other exhibits include the Bureau of Engraving and Printing’s "Billion Dollar Display" of high denomination money at Booth 1626 and a display from the United States Mint at Booth 117. Located three blocks from the convention at 1154 Boylston Street, the Massachusetts Historical Society presents "Precious Metals: From AU to ZN" in conjunction with the show.

The popular Collector Exhibits area gives ANA members the opportunity to share their collections and research with fellow hobbyists. More than 60 competitive and noncompetitive exhibits will be displayed this year on a wide range of topics. Exhibit highlights include "Medals from the American Medallic Sculpture Association" and "Early Paper Money of Massachusetts and Her Neighbors."

The Mint Promenade will feature mints from around the globe. Visitors can purchase a World Mints Passport at the front entrance to explore the area and collect world coins. Attendees can learn more by attending "World Mint Theatre" presentations Aug. 11-14 on the World Money stage near the entrance to the show. During these 30-minute presentations, mint representatives will discuss upcoming products, new ideas and current trends.

Many educational opportunities await visitors. The Maynard Sundman/Littleton Coin Company Lecture Series, held Aug. 12, features original academic research; the topic this year is "New England Numismatics and Numismatists: Then and Now." Presentations include "Colonial Edward H.R. Green, Collector Extraordinaire" by Peter Huntoon, "It May Prove a Drugg in Time: The Rise and Fall of Wampum in 17th Century Massachusetts" by Max B. Spiegel, "Making Money in Massachusetts" by Dr. Richard Doty and "Military Medals of the Colonial Wars" by Erik Goldstein.

Numismatic Theatre, held throughout the show, lets ANA members discuss their research and ideas in lecture format. Many talks focus on the convention’s host region. This year’s presentations include "Engraver and Patriot: Paul Revere, the Man and the Medallion" by convention medal artist Jamie Franki; and an early U. S. minting technology panel discussion with Dr. Richard Doty, Brad Karoleff, R.W. Julian and Douglas Mudd.

A variety of pre-convention seminars are offered, including

"Coin Collecting 101," an informal 30-minute presentation for numismatic newcomers, will be held at various times on the World Money Stage. The ANA will offer Boy Scout Coin Collecting Merit Badge and Girl Scout "Fun With Money" Patch workshops on Aug. 14 (registration required). "Treasure Trivia" is available throughout the convention, and is a fun way for children to explore the show, learn interesting facts and win great prizes.

Many professional coin and paper money dealers attending the show will provide free, informal appraisals for visitors who bring in their old coins and paper money. The annual ANA Awards Banquet will be at 8 p.m. August 14 at the Sheraton Boston.

Prue Morgan Fitts is the event’s general chair and Robert Fritsch is the assistant chair. The Boston Numismatic Society is the host club. For more information on all of the show highlights, call 719-482-9857 or visit www.worldsfairofmoney.com.

The American Numismatic Association is a nonprofit congressionally chartered educational organization dedicated to encouraging people to study and collect money and related items.