The life and work of the late Professor Fred Hollows is being celebrated on a new $1 collector coin. It will be released by the Royal Australian Mint today at the opening of a Fred Hollows photographic exhibition at Parliament House. 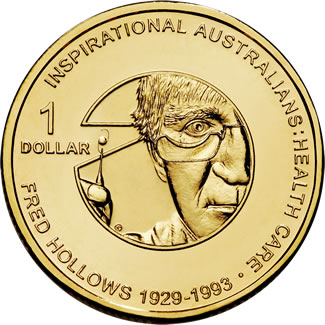 This is the third coin to be released in the Mint’s Inspirational Australians series which recognises and celebrates individual achievements and commemorates unique Australians who have made an extraordinary contribution to our society.

"Fred was an eye doctor, an internationally renowned surgeon and an advocate for social justice and the right for all people to have access to quality and affordable health care," said Ross MacDiarmid, Chief Executive Officer of the Royal Australian Mint.

"We are proud to include Fred in this popular collector series which honours truly inspirational Australians," said Mr MacDiarmid.

A skilled ophthalmologist, Fred migrated from New Zealand in 1965 and immediately set about improving aboriginal health services. Fred expanded his reach internationally in developing countries, performing cataract surgery using an implanted intraocular lens and teaching local technicians how to do the same. His work lives on in the Fred Hollows Foundation and through the vision of millions worldwide.

"Fred’s family, friends and The Foundation are honoured that the Mint chose to feature him in its Inspirational Australians series. It was a pleasure to work with the Mint through the design process and I think it’s a great thing that so many Australians are still inspired by Fred’s work," said Gabi Hollows, Founding Director, The Fred Hollows Foundation.

"The Foundation lives on because of Fred’s dream and we are honoured to see his life and work celebrated with the release of this new coin."

Sculpted by Mint Engraver Vladimir Gottwald, the coin design is inspired from a photograph taken by George Fetting, which depicts Fred holding an intraocular lens. 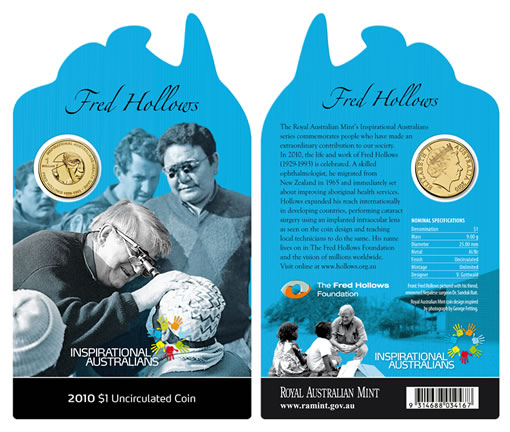 For further information on the coin, go to www.ramint.gov.au.