The Royal Australian Mint has released a new coin series titled Australia Remembers ahead of ANZAC Day which pays tribute to past and present Australians who played important roles during times of war, conflict and peacekeeping.

"It is fitting to release this new series today as the nation takes the time to reflect on and celebrate the enormous sacrifices made by our diggers and those people who have served and died for Australia," said Graham Smith, Acting Chief Executive Officer of the Royal Australian Mint.

The first coin released in the Australia Remembers series honours past and present Australian Service nurses. 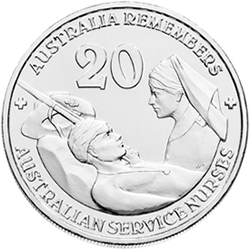 "This series will acknowledge and recognise the efforts made by everyday Australians during times of war, conflict and peacekeeping. Along with our servicemen and women who played such an important role, so too did many other Australians, whether on our soil or abroad, such as Australian Service nurses. Since the time of the Boer War, service nurses have contributed by caring for the sick and wounded in every conflict to which Australia has committed troops," said Mr Smith.

"For over 100 years Australian Services nurses have provided assistance and care with such dedication, commitment and courage. I am proud to see our nurses recognised through the release of this stunning new collector coin from the Royal Australian Mint," said Debra Cerasa FRCNA, Chief Executive Officer, Royal College of Nursing, Australia.

"In releasing this series, Australians have the opportunity to give a gift or collect a keepsake which recognises the efforts and participation made by everyday Australians who played important roles in shaping our country’s history and contributing to its protection and development," said Mr Smith.