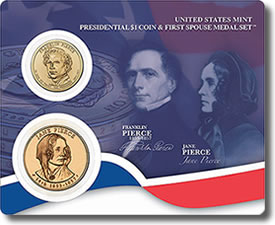 The United States Mint on Thursday released the Franklin and Jane Pierce Presidential $1 Coin & First Spouse Metal Set for a price of $11.95.

The combination marks the second release in 2010 and the fifteenth since the Presidential Dollar and First Spouse Coin programs began in 2007.

As described in the product name, the set includes and uncirculated 2010 Franklin Pierce Presidential Dollar and a 1 5/16 inch bronze medal likeness of the Jane Pierce First Spouse Gold Coin.

The pair are mounted within a US Mint described "durable plastic card enhanced with beautiful representations of the President and first spouse’s portraits, with issuance information on the back."

US Mint sales figures for last year’s sets and the Fillmore set released this year, as illustrated in the table below, are stronger than individual First Spouse Gold Coins, but less than bags and rolls of the Presidential Dollars.

Further details are available for the latest issue on the:

The United States Mint, created by Congress in 1792, is the Nation’s sole manufacturer of legal tender coinage. Its primary mission is to produce an adequate volume of circulating coinage for the Nation to conduct its trade and commerce.