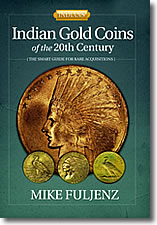 (Beaumont, Texas) — A new book by award-winning numismatic author Mike Fuljenz, Indian Gold Coins of the 20th Century, looks at the history of the popular Indian Head design $2.50 ("Quarter Eagle"), $5 ("Half Eagle") and $10 ("Eagle") denomination gold coins, and provides useful information and expert advice for collecting some of America’s most beautiful and popular rare coins.

A detailed, date-by-date analysis with color illustrations gives readers pertinent descriptions about the history of each date and mintmark as well as important comments about strike, luster, color and eye appeal.

Fuljenz examines the intriguing historical background and the controversies involved in the introduction of revolutionary new U.S. gold coin designs spurred by President Theodore Roosevelt in the early 20th century.  The first production of Indian Head $10 coins in 1907 and early 1908 did not contain the motto, IN GOD WE TRUST, until Congress legislated its return.

"Teddy Roosevelt launched an artistic renaissance in American coin design that swept across all denominations," Fuljenz explains early in the 258-page book. "Roosevelt made no secret of his contempt for the colorless drudges at the U.S. Mint headed by chief engraver Charles E. Barber. Barber’s designs exhibited all the excitement of a cold, soggy bowl of oatmeal."

The President turned to acclaimed artists Bela Lyon Pratt and Augustus Saint-Gaudens to create new coin designs. Pratt designed the Quarter Eagles and Half Eagles minted from 1908 to 1929, and Saint-Gaudens created the design for Eagles produced from 1907 to 1933 (as well as the iconic $20 Double Eagle design of 1907 to 1933 that collectors today simply refer to as "Saints" in his honor).

Fuljenz writes: "Winning a mandate to the presidency on his own merit in the 1904 election, Roosevelt was emboldened to commit what he called his ‘pet crime’ of transforming United States coinage to a state of pride and respect even if it meant trampling roughshod over the established inbred Washington political cliques."

A frequent interview guest on radio and television news and personal finance programs, Fuljenz is President of Universal Coin & Bullion, Ltd. in Beaumont, Texas and serves on the Board of Directors of the Industry Council for Tangible Assets. He is the recipient of 30 national awards from the Numismatic Literary Guild.