The official medal for the American Numismatic Association’s 119th Anniversary Convention, August 10-14 in Boston, is available for purchase. 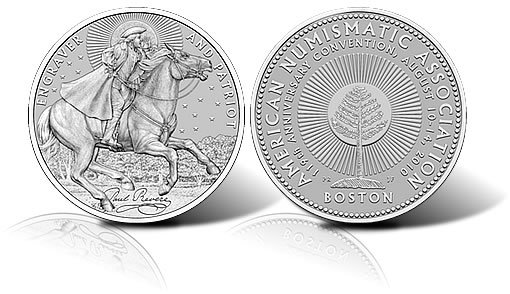 The obverse depicts the engraver and patriot’s storied "Midnight Ride," while the reverse calls to mind designs he engraved for a 2-shilling issue of colonial currency.

"He suggested excellent reading material and also gave me a good idea of what Revere wore on his ride," said Franki. "I employed the assistance of a seamstress who specializes in historic garments.

She created a period-authentic outfit based on the direction I received from the Revere House.

A friend let me borrow a horse for a photo shoot. I spent an afternoon at her farm in Concord (N.C.) dressed in colonial garb and riding the horse."

From the photos, Franki created composites, sketching in Revere’s face based on portraits by various artists. He completed the design with a replica of Revere’s signature, taken from his handwritten account of the ride to Concord.

The artist relied on Clarence S. Brigham’s reference Paul Revere’s Engravings for the reverse design, examining reproductions of the colonial currency engraved by Revere to adapt his "rising sun" and "pine tree" devices from a 2-shilling note.

This design anchors the legend for the ANA 119th annual convention. Two sets of initials attribute the design of the medal to Paul Revere and Franki. A border of 119 beads and a rim completes the composition.

Jamie Franki is a tenured associate professor at the University of North Carolina at Charlotte in the Department of Art and Art History. He received his MFA from Syracuse University.

In 2005, his American Bison Nickel reverse design was selected for a six-month minting. This nickel was awarded a Coin of the Year Award in 2005. In 2006, his Jefferson 1800 nickel obverse design was featured on America’s historic forward-facing circulating coin. He has also designed medals for the 2007 ANA National Money Show in Charlotte and 2008 World’s Fair of Money in Baltimore.

"I hope my efforts were worthy of such a weighty task," Franki said. "It was truly a pleasure to research a great American hero and to celebrate his patriotism and artistry."

Only 125 ANA numbered convention bronze medals (2 ¾ inches) will be struck along with 150 two-medal sets (1 ½ inches, bronze and silver) and 100 convention medal badges (1 ½ inches, with ribbon drape).

The American Numismatic Association is a nonprofit educational organization dedicated to encouraging people to study and collect money and related items.