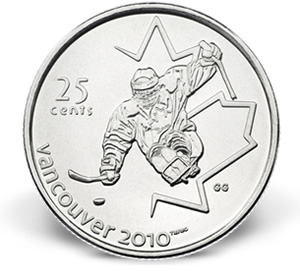 The Royal Canadian Mint is honoured that its Vancouver 2010 commemorative circulation coin program has won global acclaim as the Best New Coin Series at the third "Excellence in Currency" Awards held in conjunction with the 2010 Currency Conference of the International Association of Currency Affairs (IACA) in Buenos Aires, Argentina.

The Mint is also pleased that a new series of circulation coins it produced for the Central Bank of Fiji received a Runner-Up Award in the same category.

This is the second IACA Excellence in Currency award to be won by the Mint in the three-year history of the awards program. The 2006 25-cent Pink Ribbon circulation coin won the very first IACA award for Best New Coin.

"I welcome this award as the Mint looks back on the enormous success of its Vancouver 2010 circulation and collector coin programs and the universal admiration of the athlete medals we crafted for the 2010 Winter Games."

A total of 360 million Vancouver 2010 commemorative coins have entered circulation since the series was launched in January 2007.

It was introduced as the largest series of commemorative circulation coins ever to be produced in honour of the Olympic Movement and the first to pay tribute to the Paralympic Games, through the issue of 25-cent coins featuring Wheelchair Curling and Ice Sledge Hockey.

As the only mint to have developed the technology to apply color to circulation coins, the Mint was also proud to issue colonized versions of three of its 25-cent circulation coins commemorating Canada’s top three moments in Winter Games history.

IACA is the voice of the currency industry. It is a non-profit association that promotes and protects the common interests of the industry, and contributes to the success of its members by delivering quality value-added services. Members include currency issuing authorities and central banks, international security authorities, currency users, producers, volume currency handlers and industry suppliers.