The United States Mint today pulled back the curtains to shine the spotlight on the latest American to be honored on a $1 coin, President Franklin Pierce — the 14th President of the U.S. and second of four former Presidents to be celebrated in 2010. 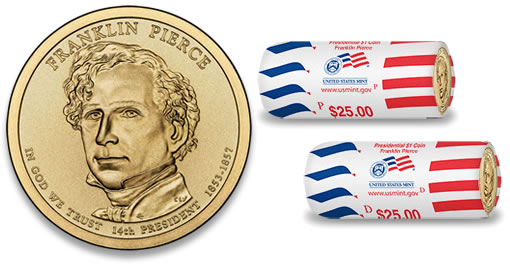 The US Mint officially introduced the coin in a ceremony in Concord, New Hampshire, at Pierce Manse, the former President’s historic home. $1 coins were released into the banking system for circulation, and 2010 Franklin Pierce Presidential Dollars Rolls are now available from the Mint for $35.95.

"Starting today, millions of coins bearing former President Franklin Pierce’s image will enter into circulation. As these coins move from hand to hand, they will be a reminder of his contribution to our great Nation," said Deputy Director Brunhart at the release ceremony.

The ceremony was co-hosted by the Franklin Pierce College and the Pierce Brigade. Local school children received a free, shiny new $1 to mark the special occasion. Adults exchanged dollar bills for the coins.

Pierce was born in Hillsboro, New Hampshire on November 23, 1804. He went to Washington in the 1830s, first as a representative and then as a senator. He served as a brigadier general in the Mexican-American War in 1847.

Pierce was a Northerner with Southern sympathies, and was elected mainly for that reason. Those in the North felt he was one of them, while those in the South was sure he would look out for their interests. He served as President of the United States from 1853-1857. Pierce was denied re-nomination by his party in 1856, and retired from politics. He died on October 8, 1869, in Concord.

Susan Gamble designed and Charles L. Vickers engraved the portrait of Franklin Pierce that is featured on the obverse or heads side of the coin. It also includes the inscriptions "FRANKLIN PIERCE," "IN GOD WE TRUST," "14TH PRESIDENT" and "1853-1857."

The reverse or tails side of the coin features a rendering of the Statue of Liberty, which is portrayed on all the Presidential $1 Coins. It was both designed and sculpted by Don Everhart.

For more information, to include coin specifications, see the Pierce Presidential Dollar.

The preceding 2010 dollar portrays former President Millard Fillmore and was released on Feb. 18, 2010.

How much would you buy 2010 Franklin Pierce Presidential $1 Coin