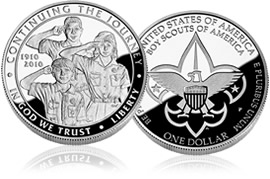 The latest coin sales figures from the United States Mint show that the commemoratives have reached 342,771, or 97.9% of the authorized 350,000 mintage.

As the Scouts uncirculated coin sold out, only the proof version remains, leaving 7,229 left for collectors to purchase.

The uncirculated option was adjusted downward, for the second straight week. Their number declined by 226, bringing their total to 107,070. The US Mint appears close in finalizing their mintages as it accounts for returns, cancellations and standby orders. Last week’s report had their total decremented by 1,375.

Demand for the proofs rose 3,437 to end at 235,701. The increase marks the first time weekly sales have not fallen since the BSA coins were released back on March 23, 2010, as the following tables highlight:

Based on the current sales figures and remaining coins to be sold, the US Mint looks to have set up a 70/30 mintage split for the proof silver dollars versus the uncirculated dollars. At the current pace, the commemoratives will be sold out in just over two weeks.

Is anyone familiar with the logistics of physically minting the commemoratives? Do they do a large run and then fulfill the tail end of orders by minting small batches? Do they run off much more than the authorized amount and when sales reach their authorized levels, they melt the overage?