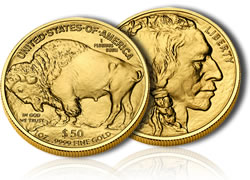 Gold coin blank shortages resulted in a late year release for the 2009 versions. Their coin sales were considered hot when 71,500 were ordered between their launch on a Thursday, October 15, to the following Sunday, October 18. The 2009 supply was depleted by December 4. Sales during their short release had topped those from all of 2007 and 2008. It would appear the 2010-dated pieces could be headed for their own record.

Struck from .9999 fine gold, the American Buffalo coin was authorized by Congress in 2005 and were first minted in June of 2006.

Both the obverse and reverse of the Buffalo coin is the same basic design that first appeared on the 1913 circulating nickel, commonly known by most as either the "Indian Head Nickel" or the "Buffalo Nickel."

The obverse design features a Native American, said to be a composite of three Indian chiefs. Many have claimed to be one of those three models, but only two were ever verified by the artist James Earle Fraser; Cheyenne Chief Two Moons and Lakota Sioux Chief Iron Tail.

The reverse design contains an image of an American buffalo, also known as a bison. It is believed by many to be modeled after Black Diamond who lived at the New York Zoological Gardens.

The Mint has not yet indicated when it will make available the numismatic proof version of the coin. It has only said that the 2010-W Proof American Buffalo Gold coin "will be offered in 2010."

I might buy this 2010 Gold Buffalo Coin very soon! Only Bullion Coins I will buy from U.S. Mint.