As the nation prepares to commemorate ANZAC Day the Royal Australian Mint will stop to remember the lost soldiers of Fromelles with a special event at the Mint in Canberra. 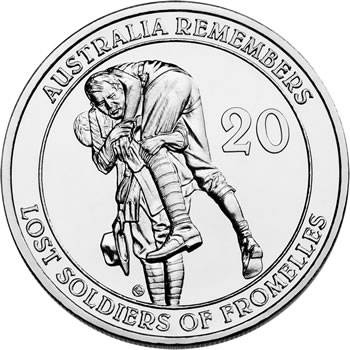 Guest speakers at the event include Lambis Englezos AM, the amateur historian and advocate whose research into the battle of Fromelles lead to the discovery of an unknown mass grave of Australian and British troops and Richard Wright, Senior Forensic Advisor to Oxford Archaeology who was responsible for exhuming the soldiers’ remains from the mass grave.

"It is fitting to release this coin today as the nation takes the time to reflect on the enormous sacrifices made by our diggers and those people who have served and died for Australia," said Graham Smith, Acting Chief Executive Officer of the Royal Australian Mint.

Lieutenant Colonel James Brownlie, Project Manager of the Australian Fromelles Project Group, will also speak in Canberra, giving an overview of the entire project including excavation, re-interment, identification and commemoration.

"On July 19 2010, the last soldier will be reburied and the new Fromelles (Pheasant Wood) Military Cemetery will be officially opened. It is a great honour and very appropriate to have this commemorative 20c coin released by the Royal Australian Mint," said Lieutenant Colonel James Brownlie.

This coin is a continuation of the Mint’s Australia Remembers series, which explores our nation’s war experiences and military history behind and beyond the battlefields. In 2009, the first coin in the series honoured Australian Service Nurses. [See Australian Coin for International Nurses Day.]

"This series give Australians the opportunity to give a gift or collect a keepsake which recognises the efforts and participation made by everyday Australians who played important roles in shaping our country’s history and contributing to its protection and development," said Mr Smith. 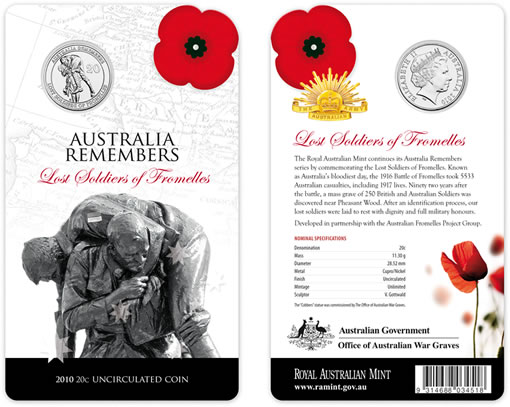 The event will take place on Tuesday 20 April 2010 from 11.00am at Royal Australian Mint, Denison Street, Deakin ACT. The coin is available to purchase from the Mint Shop, online via www.ramint.gov.au or over the phone 1300 652 020.

His Royal Highness, The Duke of Edinburgh, officially opened the Royal Australian Mint (http://www.ramint.gov.au/), Canberra, on Monday 22nd February 1965. The Mint was commissioned to produce Australia’s decimal coinage, which was to be introduced into circulation on 14th February 1966. The Royal Australian Mint holds a place in history as the first mint in Australia not to be a branch of the Royal Mint, London.