Funny Money — The Fight of the United States Secret Service against Counterfeit Money opened on Friday, April 9, 2010 at the Federal Reserve Bank of New York. 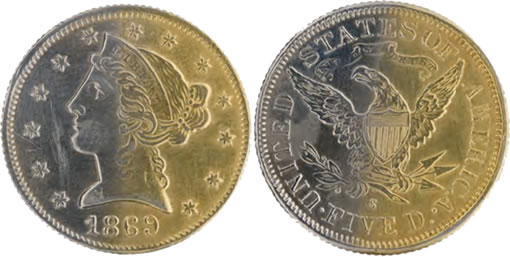 Counterfeit $5 gold coin, dated 1869, made of gold plated platinum. In the 19th century, platinum was considered of little value in comparison to gold and was often used for the production of gold counterfeit coins. In this specimen, half the gold plating has been removed.

Counterfeiting money is one of the most common financial crimes in the history of mankind. Often punished severely, it nevertheless continues to the present day.

Organized by the American Numismatic Society, the Federal Reserve Bank and the United States Secret Service, the exhibition gives a unique insight in the workings of the Secret Service in their fight against counterfeiters.

Better known today for its protection of the US President, the Secret Service was originally set up in 1865 to combat and prevent counterfeiting.

The material in the exhibition, most of which has never been displayed before, illustrates the work of one of the more mysterious government agencies, which has rarely made its operations as public as in this exhibition.

The plates from which the counterfeit on the above bank were printed were engraved by Charles H. Ulrich for Henry C. Cole of Philadelphia, PA. The pair were described in a New York Times article of 1879 as, "the most extraordinary criminals in their line of counterfeiting."

In the 1860s, over one third of all circulating currency was estimated to be counterfeit, which presented a serious threat to the economy. Within the first two decades, the Secret Service established routines for investigating counterfeiters and bringing them to justice. Newspaper reports from the period paint a vivid picture of a culture in which counterfeiters were both vilified for their crimes while being admired for their skills in producing and passing counterfeit money.

Famous counterfeiters, such as William Brockway and Victor Lustig, were very famous in their days, and the press reported their various activities in great detail. Whereas traditionally men are convicted of counterfeiting, the material shows the involvement in these operations of women, who were employed to pass fake money, supervise work or finance the purchase of equipment.

The exhibition introduces the various techniques employed by counterfeiters. Until the advent of the computer and ink-jet printers, counterfeit notes were made with engraved plates on offset printing machines. 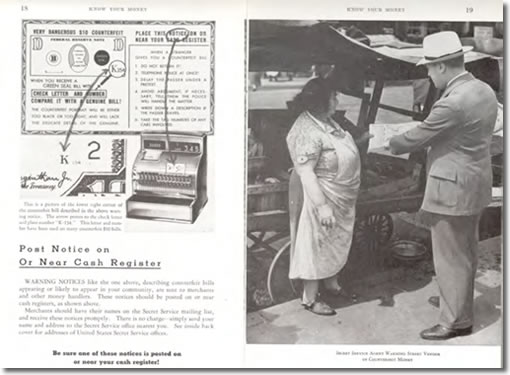 From the 1941 issue of Know Your Money. Since 1941, the United States Secret Service has produced a series of booklets to educate the public about counterfeit currency.

Nowadays, counterfeiters often use a home-office set up to produce small batches of counterfeit money. The exhibition features a note made by Albert Talton, who was arrested in California in 2007 in one of the largest and best organized counterfeit rings. He and his team produced millions of counterfeit dollars by using equipment and supplies from Staples.

Thanks to the help of several retired US Secret Service agents, the exhibition is able to shed light on an investigation of the largest counterfeit ring in US history, during which 85 people were arrested in the late 1980s in Queens, New York; the gang produced $100 million of counterfeit money, which was connected to a Colombian drug operation. Surveillance photos, mugshots and other records show the painstaking work of the special agents over several years.

The curator of the exhibition, Dr. Ute Wartenberg Kagan, explained how the exhibition looks at the people involved and what motivates them in their work, both as criminals and special agents.

"Many of the counterfeiters through the ages are motivated by greed, but in almost all the stories there is an element of pride in producing a good product. On the other hand, the investigative work of the Special Agents is so much less glamorous and gets little attention.

Through the exhibition you can see how some agents follow certain criminals for years, and a relationship develops.

When putting together the exhibition from the photos, reports, newspaper clippings, surveillance and arrest photos, I got to know some of these criminals and Special Agents quite well, and I hope that Funny Money conveys some of this atmosphere to the visitors of the exhibition."

The exhibition will run from 9 April until 31 December 2010.

About the American Numismatic Society

The American Numismatic Society (http://numismatics.org/)is the United States’ foremost numismatic museum and research institute, devoted to the study of coins from all periods and cultures.

How about NORFED Silver $20 Liberty Dollars as well as Gold $200 Liberty Dollars? Do you think that Bernard von NotHaus is a kind of Currency Freedom Fighter or Counterfeiter?