Coin & Numismatic News PCGS’s Big One, PCGS Secure Plus™, Is A Big Deal 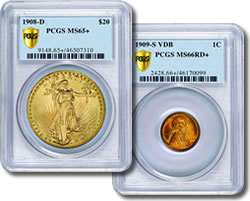 This week, the Professional Coin Grading Service announced "The Big One," a service called PCGS Secure Plus — a new service line that will be an option for most collectors except for rare and ultra rare coins which must be certified by PCGS Secure Plus.

The significant part of this service is that PCGS is adding modern computer imaging to coin grading.

Coins grade through Secure Plus will be scanned by an optical device that will map the surface of the coin creating a digital signature of its characteristics that can be used for later reference. The digital signature is a unique identification of the coin that can withstand potential coin doctoring and to prevent the users from removing the coin from the slab to try to have it graded higher. It can also be used to determine if the coin was doctored from its previous submission such as being artificially toned.

During the announcement PCGS President David Hall (videos Part 1 Part 2) said that this should end "gradeflation" as well as work out errors in the population reports when people submit coins multiple times.

Hall said that multiple submissions did not serve the industry and hope that this would end the practice. Hall noted "We did not start PCGS to grade a coin 40 times."

Hall said that PCGS has been working on this service for two years with "industry leaders" who were not mentioned. However, in the follow up presentation by PCGS CEO Don Willis (videos Part 3 and Part 4), his technical explanation included an image of the CoinSecure, Inc. to use the CP16 CoinAnalyzer. During his part of the announcement, Willis said that the process is being patented.

CoinSecure, Inc. is a Palo Alto, California based company whose president is Richard M. Haddock. Haddock is the former CEO of the LaserCard Corporation, a company specializing in secure identity solutions that include difficult to counterfeit identification cards and the technologies to detect counterfeit cards.

A search of patent records at the World Intellectual Property Organization shows that Haddock has been awarded 16 international patents for various types of optical-related work including for security-related devices. Patents pending for Haddock and CoinSecure are as follows:

As part of the PCGS Secure Plus workflow, coins will be imaged using the CP16 CoinAnalyzer and the data saved in an internal database. Will said that once the coin is imaged, it will go through the normal grading process where it will be reviewed by three graders before being reviewed by a finalizer. Only the finalizer will have access to the digital information and will take appropriate actions.

As part of the announcement, PCGS said that it will mark premium quality coins for its grade with a plus as part of the grade. When Willis made the announcement, he said that PCGS has been experimenting with a 700 point grade scale to score a coin based on its technical grading and eye appeal. Coins that grade in the upper end of the grade range will receive the plus. As Hall noted, this will "unlock the value" of better quality coins. Plus grades will be available for grades XF45 through MS68 except for MS60 and MS61.

The plus designation was announced in conjunction with Numismatic Guaranty Corporation. This service will only be available for selected classic series and not planned for modern issues.

More Plus at CCE

As part of the plus designation announcement, Collector’s Universe, the parent company of PCGS, announced that their Certified Coin Exchange market place will offer sight unseen bidding for plus grade coins. Sight unseen bidding means that purchasers will not be allowed to return a coin after auctions through the exchange. Since CCE is an exchange for dealers, it will be interesting to hear what those dealers think of this policy.

One understated announcement is that PCGS has updated their holder and added new anti-counterfeiting features to the label. Coins graded as part of the Secure Plus service will be placed in a holder that has a label with a shield. The shield will be printed with a color shifting ink that makes it difficult to duplicate. Color shifting ink is similar to the technologies that are being used on US Federal Reserve Notes. Also, Willis announced that microprinting will appear behind the shield.

Microprinting prevents the vast majority of imaging technologies from being able to duplicate the label. However, PCGS should provide a guideline as to what to look for so that collectors can verify the labels of the coins they buy.

Having been an advocate for computer based grading, this is a great start to using technology to assist in grading. Add the ability to digitally fingerprint the coin to prevent coin doctoring and crackout artists from resubmitting the coins multiple times hoping for better grades, PCGS has created "The Big One" in the world of third party grading.