(Fort Worth, Texas) — The Professional Coin Grading Service (PCGS) and Numismatic Guaranty Corporation (NGC), the rare coin market’s two leading grading services, have announced the addition of "plus" grades to their grading services. 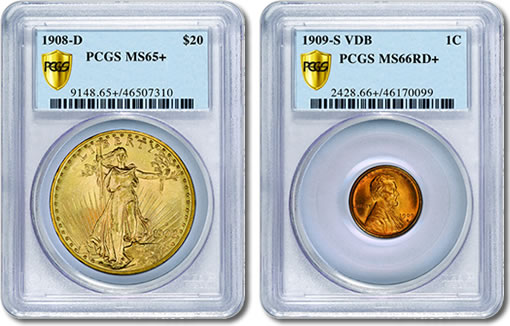 The joint announcement was issued on opening day of the American Numismatic Association National Money Show™ in Fort Worth, Texas on March 25, 2010.

PCGS founder David Hall stated, "The reality of the market place is that coins considered high end for the grade are recognized by sophisticated dealers and collectors and such coins are worth a premium in the marketplace.

The term "plus" has been part of the everyday trading and grading lingo for years. The high end for any particular grade represents the top 30 percent of the scale within a grade and I estimate that the plus designation would apply to approximately 15 percent to 20 percent of the coins within any individual grade.

For the market’s two leading grading services to recognize this reality and designate these premium coins as part of their grading services is a huge benefit to all participants in the rare coin market."

NGC Chairman Mark Salzberg stated: "The coin marketplace has evolved in the nearly 25 years since NGC and PCGS began certifying coins, and this is a very logical progression. We have always been conscious of the variation within grades. By providing this information on the label in the plus format, it is communicated in a simple and direct way that allows these distinctions to be readily understood."

Further information about the new plus grading and other services offered by the two firms is available online for Numismatic Guarantee Corporation at www.ngccoin.com and for Professional Coin Grading Service at www.pcgs.com.

PCGS and NGC Need to grade the Higher graded coins from EF up with a .5 on the holder, example 63.5 or 64.5 or 65.5 because there is still to far a spread on many coins between the grades. and the grey sheet has no pricing available so it is anybodys guess how much of a preminum to pay. At least with a 63.5 number some dealer sheet could see a bid and ask number. At least with a + designation they are moving in the right direction. Try it figure a value for an 1884-s dollar where the bid… Read more »