The Minna Canth and Equality collector coin struck by The Mint of Finland was released into circulation on Minna Canth’s Day, the Day of Equality (March 19, 2010). 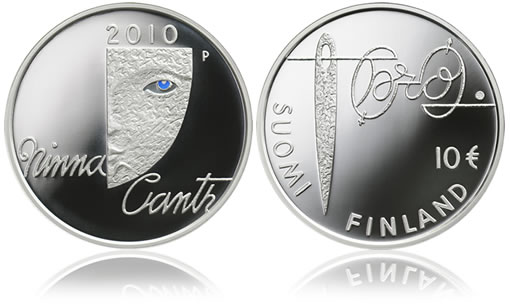 The coin marks her achievements both within literature and as an influence in society. Canth was a pioneer, a mediator, an opinion leader and an innovative radical in Finnish literature and in social thinking. She was born 19.3.1844 in Tampere and died 12.5.1897 in Kuopio.

The collector coin was designed by the sculptor Reijo Paavilainen. His design, "Neulansilma" (Eye of a Needle), was the winning entry in a competition organized by the Collector Coin committee.

The obverse side of the coin shows one side of a woman’s face superimposed with handwriting from Canth’s descriptions of the fate of women and from her extensive dramatic works.

The reverse side depicts a needle which is in the shape of the symbol of womanhood. Through the eye of this runs a so-called red thread of Minna Canth’s critical texts forming an image of equality.

"Minna Canth is the first woman to be awarded her own national flag day and women’s associations have already adopted it as their own national day, states NYTKIS General-Secretary Tanja Auvinen who also participated in judging the winning design as an expert member of the Collector Coin committee.

"Minna Canth was a versatile talent, both as a writer and as an opinion leader in social affairs; appreciation of her influence will grow and will be seen for generations to come."

"We are delighted that Minna Canth and Equality has been chosen as the theme of a collector coin. Finnish society is deemed an egalitarian by many international standards. It is vital that we can spread the word of this success on the international stage with the help of this coin," notes Mint of Finland’s Managing Director Maarit Aarni-Sirvio.

In Finland you can buy the coins from Rahapaja Moneta on +358 (0) 10 80 80 40 or online at www.rahapajamoneta.fi. The collector coin is also available at certain Suomen Posti shops as well as at well-stocked coin dealers.

On April 6th the coin will also be on sale from Mint of Finland’s own website, www.suomenrahapaja.fi.

About Mint of Finland

Mint of Finland is the leading company in its field in Scandinavia and the Baltic region. Its activities include the design, marketing and minting of coins. The company is owned by the Finnish state.

The group employs some 250 people and exports to nearly 40 countries. 2010 marks the 150th anniversary of the Mint’s foundation by the order of Tsar Alexander II.