In recognition of their heroic service over sixty-plus years ago, the Congressional Gold Medal was given to Women Airforce Service Pilots (WASP) of World War II this past Wednesday, March 10, 2010, at a ceremony held in Emancipation Hall at the Capitol Visitor Center in Washington, D.C.

During a time of national crisis, thousands of women answered their nation’s call and volunteered for duty as a pilot for the United States Army Air Force. However, unlike their male counterparts, these women were never considered members of the military and always held civilian status.

Their story is long and eventful but really starts in the months before the United States’ entrance into World War II. Seeing a need for qualified pilots, two prominent individuals submitted plans for women in non-combat aerial missions to the military, both of which were dismissed. However, following Pearl Harbor, the merits of their ideas came to light again and two separate organizations were created, the Women’s Auxiliary Ferry Squadron (WAFS) and the Women’s Flying Training Detachment (WFTD). In less than a year after their creation, the two organizations were melded into one which was called the Women Airforce Service Pilots (WASP).

Over 25,000 women applied to be a WASP during its duration with 1,078 succeeding in completing the requirements of the program. All of the individuals were already qualified commercial pilots but participated in at least 4 months of military training for the paperwork and flight maneuvers the Army Air Force required of them.

The women were stationed at over 100 air bases where they served non-combat missions such as flying new planes from their factory to embarkation locations and towing targets for gunnery practice. These were all duties which freed up their male counterparts for combat missions.

Throughout the life of the program, over 60 million miles were flown under the program resulting in 12,650 aircraft of 78 different types being delivered to their desired locations. Unfortunately, the program also cost 38 WASP lives, 11 in training and 27 on active duty.

The government classified materials related to the program shortly after the end of the War and no recognition was given to WASP members until 1977 when they were given veteran status. In 1984, each was awarded the World War II Victory Medal and those who served more than one year were also given the American Theater Ribbon/American Campaign Medal.

Owing to the long passage of time since their service, only a few of the former WASP members were able to attend the Congressional Gold Medal ceremony. However, the descendants of many attended in their absence.

"These women truly made history," Texas Sen. Kay Bailey Hutchison who co-authored the legislation approving the awards said during the ceremony Wednesday. "On behalf of a grateful nation, thank you for your service."

The Congressional Gold Medal is the highest civilian award given by Congress. It recognizes the acts of those who work for the security, prosperity and national interest of the country. 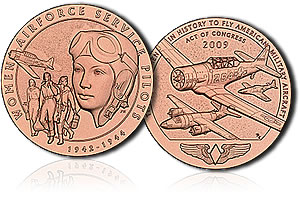 The obverse of the medals feature the portrait of a WASP in flight headgear with three other WASPs in period uniforms with an airborne AT-6 in the background.

The reverse shows three of the aircraft that WASP members flew during their tenure — the AT-6, B-26, and P-51. The WASP wings are depicted at the base of the design.  It was designed and sculpted by United States Mint Sculptor-Engraver Don Everhart.