In only a few short weeks, the United States Mint will start selling a commemorative coin which is sure to be a hit not only with traditional coin collectors, but also with many new-comers to the hobby. On March 23, 2010, the US Mint launches the 2010 Boy Scouts of America Centennial Silver Dollar.

These Boy Scouts coins, while standard in their composition and weight for a commemorative, are unique in the fact of their subject matter and the swarm of potential buyers they bring to the industry. It is estimated that almost 2.8 million youth members alone belong to the Boy Scouts of America (BSA). Add in the million plus adult members and the numbers approach 4 million active participants. And that does not take into account millions more who were a part of the organization in the past, who will eagerly race to buy one or more of the coins.

Many of these individuals, who have never before expressed an interest in collecting coins, are — and have been even before their designs were revealed — asking about the commemorative availability and pricing. Coin media and organizations around America have been receiving multiple contacts and e-mails from a wide variety of these soon-to-be-buyers, ranging from parents of Scouts to pack leaders to former Scouts.

This interest leads us to believe that these coins will very likely sell out, and probably sooner than later. One only has to look back to recent commemorative history to reinforce that feeling.

The first commemorative coin to be released by the Mint this year was the American Veterans Disabled for Life Silver Dollar. In only three days, the Mint recorded sales of 98,358 of the coins, accounting for almost 30% of the total mintage. Going back a bit further, the 2009 Abraham Lincoln Bicentennial Commemorative Silver Dollar sold an amazing 177,722 strikes in just three days. The BSA coins are expected to rival, and perhaps even surpass these impressive numbers.

For anyone interested in the coin, the recommendation is to buy early to avoid the possibility of disappointment.

The commemorative legislation entitled the Boy Scouts of America Centennial Commemorative Coin Act was introduced by Congressman Peter Sessions [R-TX] back on April 22, 2008. The bill easily passed in the House and Senate, and was signed into law (Public Law No: 110-363) by President Bush on October 8, 2008.

The obverse or heads side of the Boy Scout coin contains the images of three youth members of the Scouting organization: a Cub Scout, a female Venturer and a Boy Scout. Each of them are shown in their full uniform while giving a salute. Around the scouts, the inscriptions CONTINUING THE JOURNEY, 1910, 2010, IN GOD WE TRUST and LIBERTY are found. It was designed by Donna Weaver and engraved by Charles Vickers. 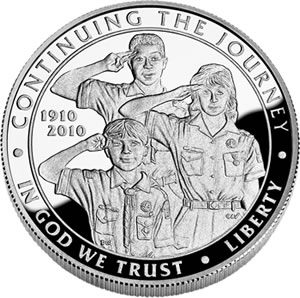 Jim Licaretz engraved the universal emblem of the Boy Scouts of America which is featured on the reverse. Surrounding that emblem are the inscriptions UNITED STATES OF AMERICA, BOY SCOUTS OF AMERICA, BE PREPARED, E PLURIBUS UNUM and ONE DOLLAR. 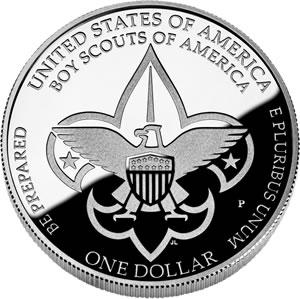 The coins will be produced in both proof and uncirculated conditions with a combined mintage of 350,000.

A surcharge of $10 on the sale of each coin will be forwarded to the National Boy Scouts of America Foundation to continue its efforts in hard to reach areas.

I reside in South Africa and am truly interested to purchase a 2010 Scou coin.
What procedure do i use in buying one.