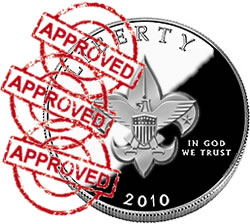 H.R. 5872 enjoyed overwhelming support in both parties, passing in the House on April 22 and the Senate on September 27.

Congressman Pete Sessions [R-TX], who is an Eagle Scout with four generations of Boy Scouts in his family, introduced the bill and was thankful it passed.

"I believe that a commemorative coin will be an important and influential symbol for Scouts of all ages and raising awareness of the importance of Scouting programs for future generations."

Senator Jeff Sessions [R-AL], who is also an Eagle Scout, introduced companion legislation in the Senate and was pleased as well.

"Scouting has been a positive influence on millions of young men across the country," said Senator Jeff Sessions. "This coin will help recognize the positive contributions that scouting has made in the development of so many young men in our country."

The Boy Scouts of America was founded on February 8, 1910. Since then, over 111 million youth have experienced one of the many Scouting programs. Today, 3 million youth members and 1 million adult leaders are in the traditional programs of Cub Scouts, Boy Scouts, and Venturing, making it the largest youth organization in the United States.

The legislation notes that in the past 4 years alone, Scouting youth and their leaders have volunteered more than 6,500,000 hours of service to their communities through more than 75,000 service projects, benefiting food banks, local schools, and civic organizations.

H.R. 5872 states the commemorative coin must be "emblematic of the 100 years of the largest youth organization in United States, the Boy Scouts of America."

Specific details prescribe that each silver dollar must show its designated value, and have the inscriptions ‘2010’, ‘Liberty’, ‘In God We Trust’, ‘United States of America’, and ‘E Pluribus Unum’.

The full text of the legislation, congressional voting records and additional information may be found on the CoinNews page: