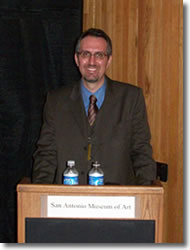 An insightful lecture on ancient Greek coin history was held at the San Antonio Museum of Art on Sunday, February 21, by Dr. Peter van Alfen.

Nearly 130 enthusiasts, including several youth, attended the event and had the opportunity to visit the ancient Greek coin exhibit permanently housed in the museum — all for an $8 or lower admission fee.

The presentation was titled, "Designing the Beautiful: Economics and Politics in the Art of Ancient Greek Coins," and began with an overview of the earliest Greek coinage. Dr. van Alfen presented exquisite ancient coins as he discussed their history and motivations driving their creations.

"We fail to remember that it was a group of people, very real people, facing a particular set of incentives and constraints, who came together to make the decisions that ultimately put the coins in consumers hands," said Dr. van Alfen.

"We numismatics too often say, ‘It was the State,’ some kind of bloodless entity following perfectly automated logic that produced the coins, rather than groups of men, in meetings, having long heated discussions over what kind of metal to use, what weight standard, what designs, and how many to make them."

President Theodore Roosevelt and his crusade to change American coinage was another topic of conversation. Artists like Augustus Saint-Gaudens, James Earle Fraser, Adolph A. Weinman, and Herman MacNeil were several of the favorite designers reviewed. The lecture was concluded with an overview and evaluation of current U.S. pieces, to include state quarters and new Lincoln cents.

Dr. Peter van Alfen is the Margaret Thompson Associate Curator of Ancient Greek Coins at the American Numismatic Society in New York. He is also the editor of the Society’s American Journal of Numismatics and magazine. The lecture was presented as part of the Louis A. and Frances B. Wagner Lecture Series.

The San Antonio Museum of Art has one of the largest collections of western antiquities in the southern United States, thanks to major gifts from the late Gilbert M. Denman, Jr. and the acquisition of the Stark-Willson Collection. The museum also owns a fine collection of Ancient Greek and Roman coins.