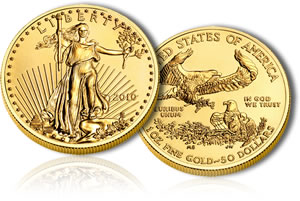 The United States Mint released 2010 American Eagle Gold One Ounce Bullion Coins to its network of authorized buyers one month ago. Sales on that day, January 19, 2010, were brisk with 30,500 sold in the first twenty-four hours.

The numbers have since remained relatively steady, but not out-of-the-park impressive. The latest US Mint figures indicate 151,000 eagles have been drawn from their inventory. 54,500 more will need to be scooped up by month’s end to match January and February totals from 2009.

The price of gold is affecting demand, and seller inventory levels. The yellow metal premiered at just above $1,120 to start 2010. Prices rose to over $1,150 within the first week, but then retreated toward $1,058 by early February. Gold has since returned to the $1,120 area. Both buyers and sellers have been cautious given gold’s volatility. As a prime example, less than one hundred 2010 American Gold Eagles have been auctioned on eBay US. It is sketchy at best to scrutinize the eagles too deeply with so few sold, but the numbers are nevertheless worth noting.

Non-graded Gold Eagles ranged in price from a low of $1,146 to an absolute high where one went for $1,300. Interestingly, it was purchased on the evening of February 19th, the ending day of the data set used in this analysis. These coins, usually dubbed "straight from the roll" averaged out at $1,223.

MS69 grades did fare better, but not significantly. The lowest price came in at $1,200 while $1,364 topped out the grade. They averaged $1,265 or about $40 over their ungraded counterparts — not much of an increase when also factoring in the time, effort and price to have them graded.

MS70 grades, as typical, attracted the best money. At least 30 of the MS70’s appeared on eBay during the time frame with the least expensive price at $1,265 (which also happens to be the average paid for an MS69). $1,525 was the ceiling. This coin had a "First Strike" designation. "First Strike" is a term used by PCGS (Professional Coin Grading Service) that describes coins submitted within 30 days of their US Mint launch. Overall, the MS70’s average was right at $1,340. That is $117 higher than non-graded examples.

There were nearly 3 bids per listing on average for successfully auctioned eagles.

As mentioned, the US Mint has sold 151,000 ounces of Gold Eagles as of Feb. 19. However, this total also includes tens of thousands of the 2009-dated coins. The Mint has 2009 inventory on hand, and is requiring authorized purchasers to buy at least one for every three of the 2010s. The Mint announced on Jan. 13 that it had 51,000 of the older versions.

The Mint does not sell its bullion coins directly to the public. Instead, it works with a small number of authorized purchasers who in turn sell the coins to precious metal providers, investors, dealers and collectors. These coins do not have a mint mark, unlike their numismatic proof and uncirculated counterparts struck specifically for collectors.