IRVINE, Calif. — Bowers and Merena Auctions, America’s leading rare coin and currency auction house, will commence its 2010 auction schedule with the Orlando Rarities Sale. The auction will be conducted on Tuesday, January 5, 2010, beginning at 6 p.m. ET at the Doubletree Resort-Orlando International Drive. 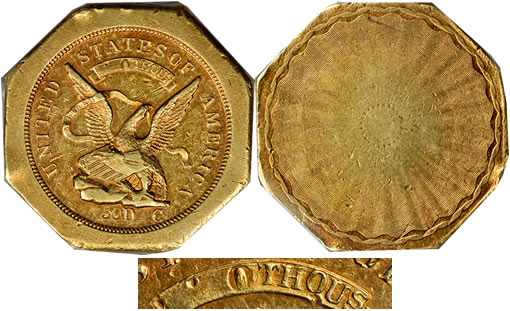 Among the leading rarities in the Orlando Rarities Sale, this 1851 Augustus Humbert Fifty-Dollar gold piece features a previously unknown engraving error. Notice the missing digits 88 in the inscription 880 THOUS, highlighted best in the partial image of the obverse at bottom. (Click Image to Enlarge.)

Pre-sale lot viewing will take place in the same location January 3 to 5 from 9 a.m. to 6 p.m. each day.

"2010 promises to be another exciting year for Bowers and Merena," remarked Steve Deeds, president of the firm. "The year will certainly begin on a high note with our eagerly anticipated Orlando Rarities Sale. Many important coins are included among the highlights of this sale, and bidding promises to be spirited for all U.S. coin series and types."

Continued Deeds: "Among the leading rarities set to cross the auction block in our Orlando Rarities Sale is an 1851 Augustus Humbert Fifty-Dollar gold piece with an extremely important, previously unknown engraving error.

Nominally an example of the Kagin-2 Lettered Edge variety — itself a scarce variety with a Rarity-5 rating — this particular piece is missing the digits 88 in the inscription 880 THOUS, resulting in a partially blank scroll on the obverse above the eagle. A discovery piece that has been certified AU-55 by PCGS, this coin is sure to warrant the undivided attention of Territorial gold specialists."

Deeds also called attention to highlights in the regular issue United States silver- and gold-coin series. "We will also be presenting a low-mintage 1916 Standing Liberty Quarter graded MS-65 Full Head by NGC, an elusive 1796 Draped Bust, Small Eagle Half Dollar of the 16 Stars variety in PCGS/CAC VG-10 and an exquisite 1879 Flowing Hair Stella rarity that NGC has certified as Proof-66 Cameo."

Interested bidders are also encouraged to view lots onsite in Orlando January 3-5, 2010 and bid in-person at the live auction, or live online through the Bowers and Merena website. A complete auction and lot viewing schedule is available at www.bowersandmerena.com or by calling 800.458.4646.

Bowers and Merena Auctions was founded in 1983 and has grown to become the world’s preeminent numismatic auctioneer with more than half a billion dollars in rare coin and currency sales. They continue to serve as Official Auctioneer of the Whitman Coin & Collectibles Baltimore Expos three times every year.

For more information about Bowers and Merena’s January 2010 Orlando Rarities Sale, call 800.458.4646. For media inquiries, ask for President Steve Deeds. Complete prices realized for all past auctions are available at www.bowersandmerena.com.