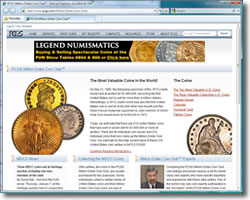 Although most collectors and dealers may never personally own a seven-figure numismatic rarity, enjoying and learning about them now is easy and fun with the launch of the PCGS Million Dollar Coin Club™ (www.PCGS.com/Million-Dollar-Coin-Club), a free reference guide available from the Professional Coin Grading Service (www.PCGS.com).

The "club" presently consists of 210 United States rare coins that have sold at auction for $1 million or more, or would sell for that much if offered, according to the expert opinions of five well-known professional numismatists. The list will be updated four times a year.

"Our estimate for the total current value of these 210 United States coin rarities is $475,515,000," said David Hall, PCGS Co-Founder and President of Collectors Universe, Inc. (NASDAQ: CLCT) who is among the pricing consultants who prepared the list.

Rankings and information in the PCGS Million Dollar Coin Club will be updated every three months online at www.PCGS.com/Million-Dollar-Coin-Club and in a printed, full-color educational booklet when more coins reach that mark and others already in the "club" bring new prices at upcoming auctions. The first edition of the booklet will be available from PCGS at the 2010 Florida United Numismatists convention in Orlando, Florida, January 7 – 10.

The top ten most valuable coins struck by the United States Mint in the PCGS Million Dollar Coin Club are:

1849 $20 Liberty (estimated PCGS grade PR64) – $15 million. The first $20 gold piece struck at the U.S. Mint is part of the National Numismatic Collection at the Smithsonian Institution.

1907 double thick Extremely High Relief Saint-Gaudens $20 (estimated PR69) – $8.5 million. Arguably the most beautiful coin ever made, the Saint-Gaudens Double Eagle design was struck in several variations including two examples that were smaller in diameter with double thickness. Both are in the Smithsonian.

1804 Class I ("Original") silver dollar (PCGS PR68) – $7.5 million. The finest of the famous 1804 silver dollars is the Sultan of Muscat-Virgil Brand-Walter Childs specimen now in a private collection.

1804 Class I ("Original") silver dollars (two examples, both PCGS PR65) – $5.5 million each. The Eckfeldt-Stickney-Atwater-Eliasberg and the Dexter-Dunham-Bareford specimens.

The 1933 Saint-Gaudens Double Eagle (estimated MS65) is listed in the PCGS Million Dollar Coin Club at $2.5 to $3.5 million. One of them sold in 2002 for $7.59 million, the highest price ever recorded for a rare coin in a public auction. Since then, ten more specimens have come to light and are the subject of a lawsuit involving whether they are legal to own. There are rumors that other examples exist bringing the estimated total surviving population to 16 to 18.

"It is our estimate that the 1933 $20 gold pieces that grade MS65, if they were legal to own, would bring $2.5 to $3.5 million each at auction. If the government wins its case and the ten coins it now is holding are not legal to own, then the value of the coins outside of government control would increase to well beyond the $3.5 million price," said Hall.

The PCGS Million Dollar Coin Club is the latest addition to the recently revised and enhanced PCGS web site. With over five million page views per month, www.PCGS.com is one of the most visited online sites in the entire numismatic field.

PCGS and PCGS CoinFacts are divisions of Collectors Universe.

Collectors Universe, Inc. is a leading provider of value added services to the high-value collectibles markets. The Company authenticates and grades collectible coins, trading cards, autographs and stamps. The Company also compiles and publishes authoritative information about United States and world coins, collectible trading cards and sports memorabilia and collectible stamps and operates its CCE dealer-to-dealer Internet bid-ask market for certified coins and its Expos trade show and conventions business. This information is accessible to collectors and dealers at the Company’s web site, www.Collectors.com, and is also published in print.