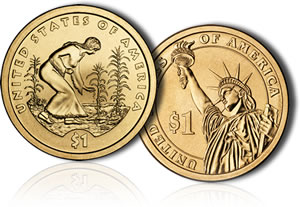 Over 355 million Andrew Jackson, Martin Van Buren, William Henry Harrison, and John Tyler Presidential $1 Coins were distributed by the Federal Reserve Banks in the last accounting period, according to their annual report to Congress released earlier this year.

However, the Reserve indicates the amount is low compared to what they have on hand, and what is returned by banks.

As first reported by Paul Gilkes in the latest issue of Coin World, the Reserve Banks are accumulating a tremendous stockpile of the golden coins. In fact, the Board of Governors of the Federal Reserve System made the following statement:

"Current supplies represent enough $1 coins for the Reserve Banks to meet transactional demand for $1 coins for about ten years."

This buildup represents a 900% plus increase in inventory over what the Banks held at the introduction of the Presidential Dollars to the system. According to Fed records, 67 million dollar coins were in their control at the start of 2007. By the end of May of this year, an astonishing 691 million dollars were being held in limbo.

"The Reserve Banks hold the residual coins as inventory at their offices and off-site coin terminals," states the Reserve.

It lists the fact that depository institutions (local banks) have been re-depositing large amounts of the dollar coins back into the Federal Reserve system indicating consumers are not accepting their wide-spread use.

The report adds that in meetings with industry officials, a feeling was conveyed that the "Presidential $1 Coin Program has successfully met their needs, but that transactional demand for $1 coins has not increased since the start of the program" and that "most meeting participants did not believe that demand would increase significantly for future coin releases, with the possible exception of the coins commemorating the most popular former Presidents."

The Board of Governors of the Federal Reserve System is required to submit this analysis annually to Congress pursuant to section 104 of the Presidential $1 Coin Act of 2005 (Public Law 109-145). The Board attempts to identify the obstacles to a smooth circulation of $1 coins by consulting with applicable industries and then relay any recommendations they may have for legislative action that may improve the US dollar coin program.

The Reserve did find that some depository institutions would like a change made to the current ordering period in place for the coins. Institutions are allowed to order coins two weeks before their release as long as they do not issue them to the public, allowing time to receive inventory. An increase to three weeks would allow remote locations sufficient time to make their orders. Conversely, most indicated that the post-release introductory period could be reduced one week from the current four weeks to three.

Without making a specific recommendation, the report compared the US system of managing commemorative coin inventories with that of several other countries. It states that in the Eurosystem, commemoratives are focused on only the 2-euro coins with limited mintages placed on them. In Canada, a limited issuance period is used along with a simultaneous issuance of non-commemorative coins. Finally, some central banks do not allow a return of commemorative issues from depository institutions eliminating a stockpile concern for those central banks.

The only recommendation made was a "concern" placed by the Board indicating that the current quantitative requirement in place on the Native American Dollars (to be 20% off all dollar coins struck) should be addressed. It feels that to require such a mandate without a regard for their demand is not conducive to an efficient system.

Whether anything will come from the latest information is not yet known. Obviously, some changes should be adopted to prevent a continual increase in the stockpile of dollar coins.

completely stop issuing new dollar coins. continue issue for collectors only. just like the kennedy half. this will work. to continue issue dollar coins for circulation. wait till the inventory diminish. melt down all those 1979 to 1981 susan anthony dollars and 2000 to 2001 sacagawea dollars.

Please, can’t we just stop making dollar bills? There is no need for them and it costs $600 million a year just to keep making and making and making them. No one would have thought having a 25¢ paper bill would be necessary or convenient in 1970, so why do we have a bill that serves the same purpose today? Almost every other country in the world has eliminated their low-denomination bills and found that (1) it saves money and (2) the public finds the coins more convenient. It seems to be an obvious choice to just stop making dollar… Read more »

Because it would take an act of Congress to eliminate the paper dollar….and we all know how ass backward Congress is….If it has anything to do with common sense and saves money, you know Congress WILL NOT do it.

I agree with Paul-
Inflation has eroded the value of the dollar, the dollar coin is the new quarter. It would save BILLIONS to stop making the dollar bill, and since they last longer, they are more environmentally friendly. A win-win all around!

My family participates in the $1 Coin “Direct Ship” program and spends 250 coins per week at local merchants. It is very convenient and we are hooked on them. Many cashiers and business owners ask us if they can have more coins. Unfortunately, I think most people want them to hoard them, not circulate them. There is a backlog in the supply since November 2009 presumably because of an internet scam in which people gain credit card benefits by purchasing thousands of these coins and then immediately depositing them and paying off the bill. This delays shipments for legitimate participants.… Read more »

INTERESTING it has been like pulling teeth to obtain the Presidential Dollar Coins and even WORSE trouble to obtain the Native American Dollar coin. Some banks will not even order the Presidential Coins and every Bank that i have visited says that they can not even order the Native American Dollar Coion. ONCE MORE, NOWHERE do i H E A R OR SEE ANY promoting of these coins. i give both all of the Dollar Coins as Gifts and Tips and as of Two 2 DAYS ago, some people are not even aware of even the Susan B Anthony coins.… Read more »

I LOVE IT. I HOPE THE BANKS CONTINUE TO RETURN DOLLAR COINS TO THE FEDERAL RESERVE. EVENTUALLY CONGRESS WILL HAVE TO TAKE ACTION AND BAN THE USE AND PRODUCTION OF THE GERM CARRYING DOLLAR BILL. THE “CDC” WILL BE VERY HAPPY AS DOLLAR BILLS CARRY MANY DISEASE BACTERIA SUCH AS: “E COLI” AND BLOOD BORN PATHOGENS LIKE “MIRSA”. DOLLARS COIN ARE BACTERIOSTATIC AND ARE ACTUALLY GERM RESISTANT. THIS WOULD BE BENEFICIAL IN MANY WAYS. I PROPOSE: 1) BAN AND STOP PRODUCING THE $1, $5, AND$10 BILL. SET A TIME LIMIT ON CASHING DOLLAR BILLS IN FOR: DOLLAR COINS TWENTIES, FIFTIES… Read more »

Only in America can a combination of bureaucratic stupidity, Congressional inertia, and corporate greed (Crane Paper) produce such insane waste! Other countries eliminated their lowest-denomination paper notes with the stroke of a pen. People fussed for a while, then settled back to normal, especially when they found out how convenient the coins are for vending machines, transit fares, etc. But here, every pipsqueak representative from East Nostril, Texas and Potato Field, Idaho would have to get in their say – not to mention trying to add pet projects like bridges and museums to a coinage law! If the government wanted… Read more »

Welcome to the wonderful world of bureaucracy. Please name something the government does well. This is the kind of bureaucrap we get with an ever expanding government. Pennies should be eliminated along with the dollar bill but no one in gov’t can figure that one out and get it implemented. The presidential carnival batting cage tokens are crappy coins but they are much better than the dollar bill and would last a lot longer as previously pointed out.

I’ve only seen 3 places that use the $1 coin, only one is a surprise: 1) The self-serve checkout line at my local grocery store accepts $1 coins, although it is not advertised. 2) A parking garage 3) A pool hall for their coin operated tables. (This was the shocker as play at most coin operated tables that I’ve come across is $1, but these tables usually accept $1. The tables I am referring to only accept $1 coins). For me this is nice, because I don’t have to fiddle with say 20 coins for 5 games of play, instead… Read more »

I can see a Mint-sponsored PSA on TV: frustrated people repeatedly feeding wrinkled dollar bills into vending machines only to have them spit back out. Along comes someone else with a dollar coin, puts it in, gets their soda or whatever, gives a bemused look at the frustrated person, and walks off happy. I agree with lepusrex: lower the limit of direct ship dollars to $100 with no shipping charge. “People power” will get these presidential metal heads into circulation – and cheaper, too, than the current methods. Visionary decision-makers just have to wrap their heads around counter-intuitive ideas that… Read more »

I see them in use at downtown street parking payment kiosks: a $1 coin gets me 1 hour for lunch at a downtown restaurant. I keep a dozen or so at a time (discretely)in a cup holder.

Now that it is 2011 I hope most of you that posted here will go back and read what you wrote. Just too much assuming goes on. We still have the paper dollar bill. The coins are not being used and now our government is spending MORE tax dollars on storage for these coins.

Mamaw, the problem was and is the bureaucratic stupidity of continuing to be the only industrialized country to keep printing such a low-denomination paper bill AND not have an effective $2 bill or coin to fill the gap between the 1 and the 5 for change-making.

Our coinage system is broken, along with much bigger stuff like the budget, health care, energy, pensions, even how we measure things. But it seems all of the supposed “fixes” proposed will only add MORE breakage.