A. H. Baldwin & Sons Ltd are delighted to announce that they have been chosen to auction the extensive collection of Renaissance and later medals formed by the New York connoisseur and fine art collector, Michael Hall. The Michael Hall collection comprises in excess of 2000 items, making it by far the largest sale of Renaissance pieces since the Max and Maurice Rosenheim (Sotheby 1923) and Henry Oppenheimer (Christie’s 1936) sales. The first auction is scheduled for May 2010. 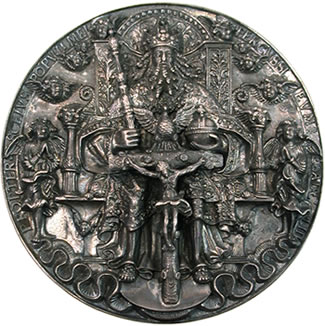 One of many Michael Hall Collection medals for auction by Baldwin’s: the Hans Reinhart The elder (c.1510-1581) Silver Trinity Medal (Moritz-pfennig). The image depicts God the Father enthroned and wearing the Imperial crown and jewelled cope, his beard and hair applied in the round with twisted silver, before him the crucified Christ surmounted by the Holy Spirit in the form of a dove; on either side angels and cherubim, the legend around, PROPTER SCELVS POPVLI MEI PERCVSSI EVM ESAIAE LIII, "For the transgression of my people he was smitten — Isiah 53", rev two angels holding a tablet inscribed with an excerpt from the Athanasian Creed and a prayer to the Trinity. Truly one of the most significant medals of the later European renaissance. Click to Enlarge.

Before turning to the world of antiques, Michael Hall’s earlier years were spent in Hollywood. Most memorably, in 1946, he was cast as Fredric March’s son in William Wyler’s "The Best Years of our Lives". The majority of the collection was formed in the 1960s and ’70s, a period when Hall was living for much of the time in London.

The medals were purchased from the dealers of the day, in London and other European centres, rather than at auction. Over the ensuing years the collection has remained mostly unseen. Michael Hall gifted most of his British medals to the Los Angeles County Museum some years ago, though some important pieces were retained and will be offered in the sales.

The strength of the collection is in early Italian medals, otherwise it remains very comprehensive in the medals of later Italy, France, Germany, the Holy Roman Empire and the Netherlands. There are extensive groups of Papal medals, many of which featured in the 1981 publication Roma Resurgens, Papal Medals from the Age of the Baroque; and a group of Florentine Baroque medals that will be seen as a match to the Lankheit Collection sold by Morton & Eden (May 2003).

One of the most important pieces to be included in the first sale will be Pisanello’s cast bronze portrait medal of Cecilia Gonzaga. Antonio Pisano, called Pisanello (c. 1395 – c. 1455), was the pioneering artist who, from around 1435, turned his portraiture into a medallic format, the first artist so to do. Dating from 1447, the medal of the 21 year old Cecilia Gonzaga shows his only female subject. 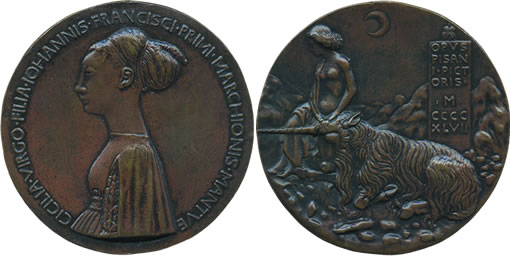 On the reverse, in a moonlit landscape, she is depicted near-naked as the figure of Innocence who, as a virgin, is able to tame the Unicorn. It is an image filled with symbolism — Graham Pollard in the new (2008) catalogue of the collection of the National Gallery in Washington, calls it a "gracious and charming conceit". This stunning medal was selected by the art historian Stephen K. Scher for the 1994/5 touring exhibition, The Currency of Fame (as were four further medals in the collection). Baldwin’s are expecting the medal to sell for a figure in excess of £65,000.

Ian Goldbart, Managing Director of Baldwin’s, admitted to being overwhelmed by the sheer size and quality of the collection, "We have made the sale of commemorative, historical and artistic medals a feature in our auctions and have been complimented on our presentation, accurate descriptions and historical footnotes. The sale of Michael Hall’s collection takes us to a new level and we are looking forward to the challenge".

The appointment of Baldwin’s to sell this collection marks the continued expansion of the company since its merger with Noble Investments (UK) PLC; it is fast becoming a formidable force on the international Numismatic stage. 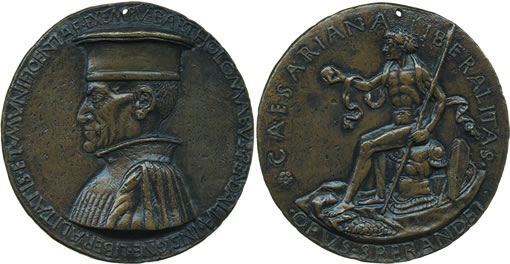 Sperandio, Bartolommeo Pendaglia (dies 1462). Bronze, cast. Obverse: Bust in profile to the left. The sitter’s hair is cropped and he wears a flat-topped hat or mortier. His pleated robe has a stiff, expanding collar. Incised lines on the robe suggest a brocade pattern. Legend: BARTHOLOMAEVS PENDALIA INSIGNE LIBERALITATIS ET MUNIFICENTIAE EXEMPLV (Bartolommeo Pendaglia, the emblem of liberality and model of munificence).

Reverse: A nude male figure is seated on the spoils of war, a cuirass and two shields. He holds a spear in his left hand and a round object (a pearl?) in his right. A thin scarf is drapped over his shoulders and flutters down his arms. His left foot rests on a small sack, from which innumerable coins are escaping. Legend: (rose stop) CAESARIANA LIBERALITAS (The liberality of Caesar). Below, the signature: OPVS SPERANDEI (The work of Sperandio). Click to Enlarge. 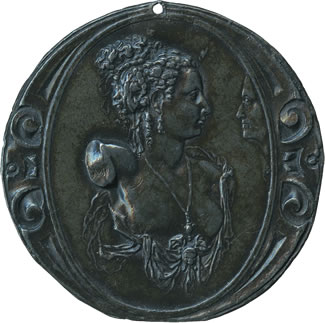 Alfonso Ruspagiari, Bust of a Woman Viewed by a Face in Profile. Lead alloy, hollow uniface cast. Obverse: Bust of a woman, shown in three-quarter profile, as though floating in an oval field of relief. The truncation of the bust is bound by a narrow rigid girdle, through which a light veil is intertwined. The veil is bunched at the centre under a grotesque mask that seems to be attached to the girdle, while the rest of it is swept behind the bust and knotted over the left shoulder.

A pendant on a ribbon hangs from the woman’s neck. Her hair is elabourately wound with a twisted cord and a veil. Her right shoulder is raised. Both arms have been truncated just below the shoulder. This is given arresting emphasis by the boldposition of the truncation of the proper right arm, with the signature A.R appearing in the cut presented directly to the viewer. The woman’s face, in profile facing right, is confronted by the profile of another face looking in from the scrolled frame cast integrally as part of this relief. There is a trace of drapery at the base of the neck of this second face. Reverse: plain. Click to Enlarge.

Baldwin’s is a long-established company, with a history going back to the 1872. A.H. Baldwin and Sons Ltd offer coins for collectors, including Ancient, Mediaeval, British and Foreign Coins, Commemorative Medals, Tokens and Numismatic Books. Our stock is the largest in the UK. Baldwins also organise Auctions. We conduct regular auctions of all numismatic material; coins from all areas and historical periods but also Banknotes, Military Medals and Books. The Auctions are run worldwide: London, New York, Singapore and Hong Kong, we have also conducted auctions in the United Arab Emirates.

Hi, I would love to know more about the Hall medal collection. Is there any way of obtaining the pieces sold at the auction along with prices. Regards Ernie