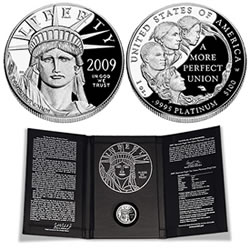 It took just over a week for it to happen. The US Mint has sold out of the 2009 American Eagle Platinum Proof Coins, exactly as had been predicted by many numismatic resources.

Released at Noon Eastern on Thursday, December 3, 2009, the Platinum Eagles were limited to a mintage of only 8,000. Over 7,200 of those sold in the first few days, even with a household order limit of 5 pieces in place. The US Mint sold just 4,769 of the one ounce proof coins during all of last year.

Waiting List Notice: The number of orders we have taken meets the maximum limit for the 2009 American Eagle One Ounce Platinum Proof Coin. You may still place an order for this product, which will go on a waiting list. If a product becomes available due to an order cancellation, we will fulfill orders from the waiting list on a first-in, first-served basis. We cannot provide information about your position on the waiting list.

Aside from the limited mintage, collectors have been seeking the one ounce, 99.95 percent pure platinum coins for several other reasons. Topmost is the fact that it is the only platinum option available from the Mint this year — there are no bullion versions, or fractional sizes. The Mint announced in October that the bullion coins would not be struck for 2009. Uncirculated and fractional Platinum Proof Eagles were cut from the US Mint’s product portfolio late last year.

The obverse of the Platinum Eagles contain an image of Lady Liberty designed by United States Mint Chief Engraver John Mercanti as they have done since their introduction. The reverse contains an image of the them “To Form a More Perfect Union” which is the first of six new annual designs depicting the principles of the Preamble of the Constitution of the United States. It was designed by Susan Gamble.

To be placed on the waiting list while that option is still available, visit the US Mint’s website (www.usmint.gov) via the: