The United States Mint recently unveiled the new design for the 2009 American Eagle Platinum Coin and announced the official release date of Thursday, Dec. 3, 2009, for the proof version. An artist rendering was provided for the eagle then. Now the US Mint has released images of the coin itself. 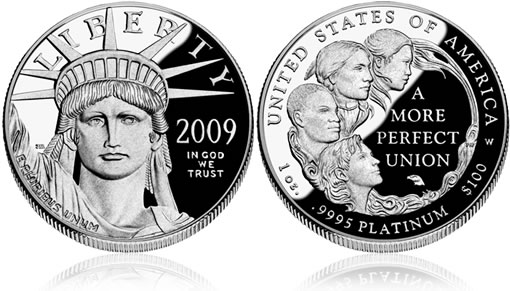 The reverse image shows the new coin theme, "To Form a More Perfect Union." It portrays the diversity of the nation with four faces on the left looking towards the right, hair and clothing weaved together. This weaving completes a circle where within the concept is inscribed.

The 2009 design is the first of six that will be featured annually on the Platinum Eagles through 2014. The themes are based on narratives provided by Chief Justice of the United States, John G. Roberts, Jr. on the six principles of the Preamble of the United States Constitution.

Future concepts to be included on the platinum coins include:

Also found on the 2009 reverse, which was designed by Susan Gamble and sculpted by Phebe Hemphill, is a new "privy mark" of an American Eagle. The mark is from an original coin punch identified at the US Mint in Philadelphia.

Annually changing reverses are nothing new for American Platinum Eagles. They have featured a new design since their introduction in 1997. The obverses, however, have always been an image of the Statue of Liberty designed by United States Mint Chief Engraver John Mercanti.

A maximum mintage of 8,000 has been put in place for these coins.

At first I wasn’t so impressed with this design — but its growing on me. It’s an unprecedented, controversial style and certainly captures the mood of the country right now. I think this coin will be discussed for years to come.