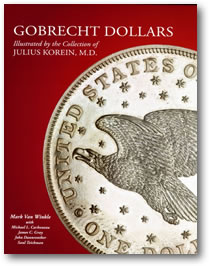 DALLAS, TX — Few varieties of U.S. coinage have been the subject of as much speculation, controversy and admiration as Gobrecht dollars.

Now Heritage Auction Galleries and Ivy Press have released the 136-page book Gobrecht Dollars, the most thorough review to date of the existing scholarship on these much sought-after U.S. coins.

"This reference book, the result of five-and-a-half-years of work, is intended for the general numismatist that is looking for a deeper understanding of these fascinating coins," said Mark Van Winkle, editor of the tome and Chief Cataloger at Heritage Auctions.

"It gathers together the diverse threads of the Gobrecht story without delving into the more speculative areas of die markers and their possible consequence for establishing emission sequences."

The overriding question of emission sequences is an area that is, and has been, under investigation for some time and, it is reasoned, will eventually lead to a generally accepted striking order.

"Without a doubt this book is important to a wide range of numismatists, as this information has never been presented together so thoroughly," said Van Winkle. "It is not, however, the last word on this fascinating series."

The book brings together all the best known writings on Gobrecht dollars from the past 20 years and is based upon a series of three articles written by Jim Gray and Mike Carboneau in 1991, 2000, and 2001 and expounded upon by those two writers, along with scholarship by Van Winkle, John Dannreuther and Saul Teichman.  The book brings together the most up-to-date findings about Gobrecht dollars based on the coins themselves as primary sources, rather than secondary sources (some of which date to 1860).

"Dannreuther makes a special contribution," said Van Winkle, "with his articles dealing with the die clash line on the reverse of some 1836 dollars, previously thought to be a die scratch, as well as his discovery of the effacement of Gobrecht’s name from the post-1836 dies.”

What many numismatists will find particularly spectacular about Gobrecht Dollars are the numerous illustrations, more than 100 in all, ranging from glorious full color to detailed black and white images. The spectacular collection of the late Dr. Julius Korein, now permanently impounded in the ANS, has detailed, up-to-date information on each design variant, including alignment, mintage, rarity, weight, pedigree and description.

Each of the 25 Gobrecht issues (including splashers) have been expertly photographed in detail, providing collectors with their best look yet at most every variant, except one: the Judd-109, which, for the purposes of this book, was compiled as a composite photo. More than likely the Judd-109 is unique and hasn’t been seen since the late 1960s.

"We’re very excited to get this book into the hands of numismatists at all levels of the hobby," said Van Winkle," and we look forward to new findings as research continues on these fascinating coins."

Orders for Gobrecht Dollars can be placed online at www.HA.com/GobrechtDollars. Each copy is $75.