This singular coin comes to auction courtesy of the Dr. and Mrs. Steven L. Duckor Half Dollar Collection, with a pedigree that extends all the way back to the San Francisco Mint, which originally sent the coin to S. Benton Emery.

"The 1901-S half dollar is one of several coins in the collection to have a pedigree that begins with the mint of origin," said Greg Rohan, President of Heritage. "We felt it appropriate to offer coins of an historic nature given the American historical relevance of the venue. Boston is a great American numismatic city and this auction deserves coins equal to that historical weight."

Many Colonial coins are returning to Boston, the city where they were struck, among them several of the best examples of Massachusetts silver coinage. 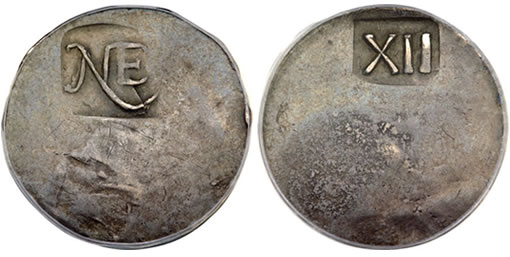 Rare, Important AU New England Shilling Noe III-C, First Coins Struck in the British Colonies, Plated in Noe. The rarity and significance of the New England shilling can hardly be overstated. The NE pieces claim the title of first coins struck in British America. Few collections, including some of the most advanced cabinets of Colonial coins, have possessed a representative of the New England shilling, let alone an example that has the quality of the present coin. Click coin image to visit HA.com for more information.

"Several consignors contributed important Massachusetts silver to this auction, but special mention has to be made of Dwight Manley’s NE Silver Collection," said Rohan. "The set is small but mighty, just five lots accounting for a million dollars in estimated value.

Any one item would be a worthy highlight, but ‘first among equals’ is Lot 3002, his New England Shilling, Noe III-C, not dated but struck in 1652, graded AU50 by PCGS. It is one of the earliest silver coins struck by a British colony in North America, a wonderful historic artifact owned by numismatic luminaries including F.C.C. Boyd and John J. Ford, Jr. It is estimated at $300,000+." 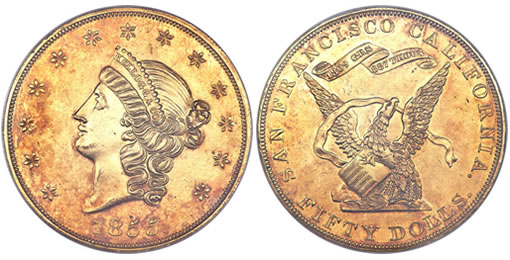 1855 $50 Kellogg & Co. Fifty Dollar, PR60 PCGS. In the words of B. Max Mehl, the Kellogg & Co. fifty dollar gold pieces are “the most beautiful of all Pioneer gold coins and one of the rarest.” While Heritage has handled Kellogg fifties on several occasions in the past, we take particular pleasure in offering this specimen, which seems to match none of the previously known examples of this extraordinary issue. A “new” Kellogg fifty is a numismatic landmark and an unparalleled opportunity for the Territorial gold collector. Click coin image to visit HA.com for more information.

"After extensive research, we came to the conclusion that this 1855 Kellogg & Co. coin is not one of the 13 previously identified examples," said Rohan. "These coins were struck in proof format, likely for presentation purposes, and examples made for circulation are unknown. This enigmatic but undoubtedly important lot is a remarkable opportunity for the dedicated Territorial gold collector."

A 1931 Double Eagle, MS67 PCGS, Lot 3650, a highlight of the Dr. Brandon Smith Collection, formerly from the esteemed Phillip H. Morse Collection of Saint-Gaudens Coinage. It is estimated at $250,000+.

"By 1931, while double eagle gold coins were struck, they were not released to banks, and most of the 1931 issue was melted without ever having left government control," said Rohan. "This Superb Gem is the single finest example known to NGC or PCGS out of just 100 to 120 pieces known. Needless to say, we’re thrilled to be offering this great American coin."

Another gold highlight is Lot 3561, a 1907 Wire Rim Saint-Gaudens Ten Dollar Pattern, Judd-1902, PR62 NGC, one of the most prestigious pieces Heritage is offering as part of the Jarosi Collection. This unique pattern in gold has the same design as the famous Judd-1901 Wire Rim Saint-Gaudens ten dollar coins, but the edge is plain rather than lettered, which suggests that this is one of the earliest gold impressions of the Saint-Gaudens eagle design, possibly the earliest. It is estimated at $175,000+.

Lot 4490, one of the finest Mercury Dimes in existence, a 1916-D, MS67 Full Bands PCGS, CAC, is one of the principal American silver coinage offerings in the entire auction. It comes to auction via the Joshua II Collection of Mercury Dimes,the #1 All-Time Finest PCGS Registry Set for the series, from which the 1916-D is the lowest-mintage issue. It is estimated at $100,000+.

"This is a simply magnificent example," said Rohan. "Not only is it a Superb Gem, it’s one of just six MS67 Full Bands coins certified by PCGS, with none finer, the best example the collector behind Joshua II — or anyone else, for that matter — could hope to acquire."

Another extraordinary half dollar that collectors will not want to miss is the 1817/4 Half Dollar, O-102a, VF20 PCGS, Lot 3147, a cornerstone of the Witham Collection of Capped Bust Half Dollars. This is only the fourth Heritage auction appearance of this extremely rare overdate variety in the last 15 years, and while it is not the rarest Overton variety of Bust half dollar, it is easily among the most famous rarities in the series, owing to its appearances in the famous Guide Book of United States Coins, which elevated it in the eyes of generalist collectors. It is estimated at $80,000+.

Other Featured Collections scheduled to appear in the auction include: