The United States Mint officially confirmed today that the one-ounce 2009 American Platinum Eagle Proof Coin will be available for purchase at noon Eastern Time (ET) December 3, 2009 — the same date it had tentatively provided back in October. As part of the announcement, the US Mint released an image of the new theme for the reverse, which will change annually on platinum coins until 2014. 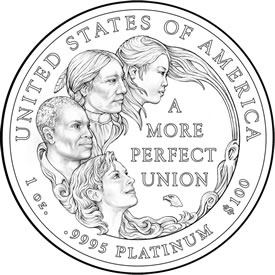 Platinum Eagles have not been available from the Mint all year and, as it announced in October, no bullion versions will be struck until at least 2010. This makes the one-ounce proof eagle the only coin available to collectors and investors who desire a 2009-dated platinum American coin. (The Mint discontinued all Platinum Uncirculated Eagles and the fractional Platinum Eagle Proofs in 2008.)

The reverse of this year’s coin will feature the first design of a six year series commemorating the core concepts of American Democracy by showcasing six principles of the Preamble of the United States Constitution.The US Mint requested narratives to be used to determine the coin themes from Chief Justice of the United States, John G. Roberts, Jr., which he provided.

Also shown are the inscriptions "A MORE PERFECT UNION," "UNITED STATES OF AMERICA," "1 oz. .9995 PLATINUM" and the face value of "$100." A new element added this year is an American Eagle "privy mark," based on an original "coin punch" identified at the United States Mint at Philadelphia.

Price of the coins will be based on the Mint’s pricing structure for numismatic products containing precious metals. If the weekly London Fix platinum average stays between the current $1,350.00 to $1,449.99 range, the eagles will be offered at $1,692.00.

The Mint has stated it will adhere to an order limit of five per household with a maximum mintage of only 8,000 coins — all of which will be struck at the Mint’s West Point facility.

Once available, orders for the Platinum Eagles can be made via the US Mint’s website at www.usmint.gov or by calling their toll-free number at 1-800-USA-MINT (872-6468). Hearing and speech impaired customers may order by calling 1-888-321-MINT.

who is the chicken?