The 20,000 limited edition cover includes two of the quarters struck from the first day they were minted — Aug. 3, 2009. One quarter-dollar is from the Mint’s Denver facility while the other was produced in Philadelphia.

An attractive display card housing the two quarters includes a 44-cent Flag stamp and a postmark of SEP 28, 2009, CHARLOTTE AMALIE, ST. THOMAS, VI, marking when the quarters were first released to the public.

An outline of the three major islands (St. Croix, St. Thomas and St. John) of the US Virgin Islands is featured on the reverse of the quarter. Also shown is the offical bird of the territory the yellow breast, sometimes called the banana quit, as well as the yellow cedar or yellow elder, the official flower. A Tyre Palm Tree appears along with the inscriptions, U.S. VIRGIN ISLANDS and United in Pride and Hope, the official motto of the territory. It was sculpted by Joseph Menna.

The US Virgin Islands Quarter is the fifth coin in a series of six issued in the 2009 District of Columbia and U.S. Territories Quarters Program. The other five quarter-dollars commemorate the D.C., Puerto Rico, Guam, American Samoa and the Commonwealth of the Northern Mariana Islands. 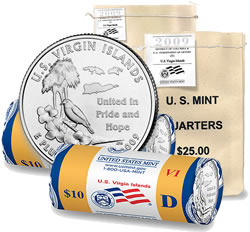 While these figures may seem high to the casual observer, it is a mere shadow compared to any state quarter mintages.

Additionally, the US Mint offers circulating US Virgin Islands quarters in bags and rolls. The following table shows the latest available sale figures for these compared to their week prior numbers (Nov. 1 vs. Nov. 11).

I have a 2007 Virgin Island quarter. And i can’t find any info on it. can anyone help.

I just got one today, as change from a restaurant. I’m 99% sure it’s a fake. The bust of Washington is all wrong, it doesn’t say what denomination it is, the weight is off, there are no ridges on the outside, and it doesn’t even sound like a quarter. I live outside of Washington DC and I’m looking forward to taking this up to the mint very soon.

Did anyone find out about the 2007 virgin Island quarters