Artist renderings of three Virgin Islands commemorative quarter designs have been prepared by the United States Mint and sent back to the Office of the Governor for review. U.S. Virgin Island residents can vote for their favorite design online or by mail-in ballot. Voting ends Friday, June 13.

The winning design will be recommended to the U.S. Mint as the selected commemorative quarter for issuance next year as part of the District of Columbia and United States Territories Circulating Quarter Dollar Program.

With the conclusion of the successful 50 State Quarters® Program in 2008, the quarter “baton” has passed hands from the states and moved to honor the District of Columbia and U.S. Territories with their six new quarters in 2009. Thousands of Virgin Islands residents have already voted for their favorite quarter design.

"This is a truly historic process, and I am pleased at the tremendous response of the community in voicing their personal choices for a Virgin Islands Commemorative Quarter design," Governor deJongh said.

No matter which design wins, as a territory we are collectively choosing the design for our Virgin Islands Commemorative Quarter together."

Over 500 million Virgin Islands Commemorative Quarters will be produced in 2009 and will be released for circulation at the end of next year. Proof and Uncirculated quarter sets will be available next year as well.

Virgin Islands officials provided quarter design narratives to help the United States Mint create artists renderings or drawings for each quarter idea. Governor. John P. deJongh, Jr. was pleased with each of the designs by the Mint as well as the committee he selected to manage the process. The Governor commented,

"This recognition by The United States Mint is a great honor and gives Virgin Islanders and the people of this nation another opportunity to learn about V.I. history.

One of the goals of the Selections Committee was to encapsulate a message that recognizes the beauty of the islands, as well as our culture, heritage, and our dynamic experience as a people.

I would like to congratulate the Selections Committee for their diligent efforts to involve the community as much as possible in selecting a final design for this special coin".

The completed renderings in the form of images are included beside descriptions of each, as provided through Governor deJongh’ office. A link toward the bottom of the page is listed for voting.

A version of a Conch Shell Blower representing the call to freedom. 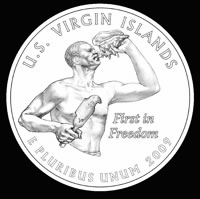 The inscription “First in Freedom” is in scripted next to the Conch Shell Blower. This represents the Virgin Islands being the first jurisdiction currently under the U.S. Flag to be emancipated from slavery (1848).

This rendition also highlights the Amerindian Struggle with Christopher Columbus upon his arrival at historic Salt River in St. Croix in 1493, the 1878 Fireburn in St. Croix and the first successful slave rebellion in the Western Hemisphere on St. John in 1733.

The legacy of the struggle for freedom is of great importance to the Virgin Islands considering that over three quarters of our population is of African Descent, the only State or Territory under the U.S. Flag with that distinction.

A geographical rendition of the Virgin Islands, which includes the 3 major islands and an interpretation of the Three Queens. 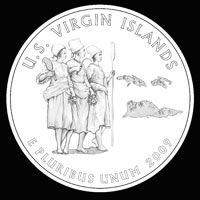 The Three Queens are symbolic of St. Thomas, St. John, and St. Croix.

The Queen representing St. Thomas has an oar in her hand. This is symbolic of the maritime / mercantile nature of the Harbor of Charlotte Amalia.

The Queen representing St. John would have a sickle in her hand, symbolic of plantation life on St. John which Slaves successfully rebelled against in 1733, the first in the Western Hemisphere.

The Queen representing St. Croix has a cane bill in her hand, representative of St. Croix as the agricultural center of the Territory. The representation of the Queens also showcases the pivotal role of women in Virgin Islands History. 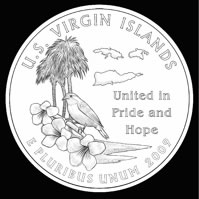 The bird, the Yellow Breast or Banana Quit (Coreba Flaveola), and the official flower of the Virgin Islands, the Yellow Cedar or Yellow Elder (Tacoma Stans), represent the natural wonder and beauty of our islands.

These are placed on the background of a beach with the Tyre Palm (coccothrinax alta) native to the Virgin Islands.

The inscription “United in Pride and Hope,” the Official Motto of the Territory found on the Virgin Islands Territorial Seal, is placed to the right.

Virgin Islands residents may cast a vote for their favorite design online or through mail-in ballot — both found on:

Paper ballots are also available at Government House, the Administrator’s Office on all three islands, and at all public libraries and Public High Schools throughout the territory. In addition, a copy of the ballot will be placed in the Virgin Islands Daily News, the St. Croix Avis, as well as the St. John Tradewinds.