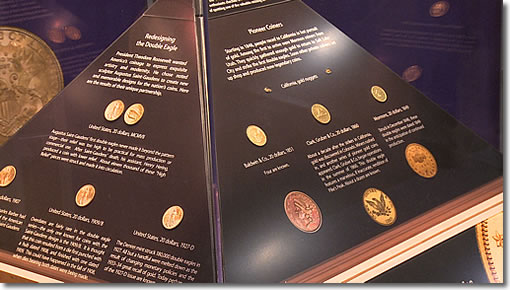 There are just a few of the historic coins in the Smithsonian’s traveling exhibit, "Good as Gold – America’s Double Eagles." (Photo credit: PCGS)

The 7 1/2 minute program is on PCGS’ home page at www.PCGS.com. By clicking the full screen option, viewers get can get an up close ‘n’ personal with some of America’s greatest numismatic gold rarities that were exhibited for the first time together outside of Washington, D.C. at the American Numismatic Association’s World’s Fair of Money® convention in Los Angeles, August 5 – 9, 2009.

"This stunning exhibition will be displayed at the next three ANA spring and summer conventions. We created this video in cooperation with the Smithsonian and made it available on our web site so that everyone can enjoy seeing and learning about these amazing coins whenever it is convenient to do so," said Don Willis, PCGS President.

Jim Hughes, Associate Curator of the National Numismatic Collection, gives viewers a "private tour" describing and showing on camera many of the 20 historic coins in the exhibit.

Highlights include an 1849 pattern Liberty Double Eagle, the first $20 denomination coin struck by the United States Mint during the early days of the California Gold Rush, and one of the Smithsonian’s two 1933 Saint-Gaudens Double Eagles, representing the last year of production.

Hughes describes the 1849 pattern as "probably the highlight of highlights of the Smithsonian collection."

The videos also shows examples from the exhibit of branch mint gold pieces as well as territorial and private gold coins, such as Clark, Gruber & Co. of Denver, Baldwin & Co. of San Francisco, and Mormon gold pieces struck in Salt Lake City.

The National Numismatic Collection consists of more than 1.5 million objects, including coins, medals and paper money. The Collection is housed at the Smithsonian National Museum of American History. For additional information, visit www.AmericanHistory.si.edu.