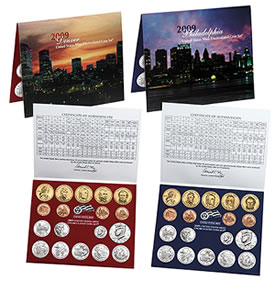 The 2009 United States Mint Uncirculated Coin Set® went on sale Thursday at noon Eastern Time for the price of $27.95. The product, which most numismatists will generally refer to simply as the 2009 Mint Set, includes an array of 36 coins. These are struck in uncirculated condition with 18 minted in Denver and the remaining from Philadelphia.

The 18 coins are grouped into their own US Mint folder — red for Denver and blue for Philadelphia — with included coin specifications and certificate of authenticity.

The annual sets are one of the most popular US Mint offerings, as exemplified by last year’s set which had total sales of 745,464. (The number would have been higher, but they were unexpectedly pulled from Mint store shelves on Feb. 25.) The 2008 US Mint set had fewer coins at 28 and was therefore issued at a less expensive $22.95 price. As another reference, 907,268 of the same priced 2007 US Mint sets were purchased by collectors.

In an interesting side note but also another example that highlights the product’s popularity, each of the older sets are currently being sold on the secondary market with solid premiums. The 2008s are going for between $40-$50 on eBay while the 2007s are in the $30-$40 range.

As mentioned, all 36 coins are struck in uncirculated condition. Each has a satin finish.

"United States Mint uncirculated coins are struck on special presses using greater force than circulating coins, producing a sharp, intricately detailed image [first introduced in 2005]," the US Mint describes. "The satin-finish coins are sealed in a blister and displayed in a folder."

The new set contains versions of all the 2009 circulating coins featuring 1-year only designs, including the:

Similar to this year’s proof sets, the cents are specially minted using the same metallic composition as the inaugural 1909 Lincoln penny, which is 95% copper, 3% zinc and 2% tin. Unexpected tarnish issues popped up with them early, which actually delayed the Mint sets scheduled summer release.

The inclusion of the cents, which celebrate the 200th anniversary of Abraham Lincoln’s birth, are expected to drive sales substantially higher. The 2009 Mint Set is the only way to acquire the Lincoln coins in a satin finish.

The mint set set may be found on http://www.usmint.gov/, or directly on the US Mint page:

The United States Mint, the nation’s sole manufacturer of legal tender coinage, was created by Congress in 1792.  Its primary mission is to produce an adequate volume of circulating coinage for the nation to conduct its trade and commerce.  The United States Mint also produces proof, uncirculated, and commemorative coins; Congressional Gold Medals; and silver, gold and platinum bullion coins.

UNDER PRICED FOR WHAT YOU ARE GETTING, A PIECE OF HISTORY HONORING LINCOLN WITH THESE COOLECTABLE PENNIES.

I got the 36 PIECE 2009 P & D MINT SET ERROR PENNY NICKEL DIME QUARTER HALF DOLLAR SATIN ….the dime is sealed ontop of the penny…so one spot is empty…how many errors was there like this?