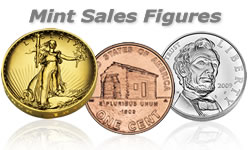 Demand for gold coins and 2009 Proof Sets is turning out to be exceptionally high this September, US Mint sales data reveals.

The latest weekly sales figures also show collector coins were mixed compared to the week prior, with very narrow up or down changes. Several highlights follow:

The non bullion coin sales figures above have an "as of date" of Sept. 20. The last reported sales figures are located at 2009 Proof Sets Shine, Presidential Dollar Sets Pass 600K.