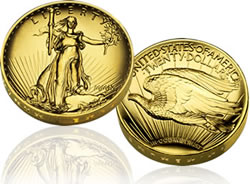 2009 UHR $20 Gold Coins will be much easier for coin dealers to purchase going forward. The US Mint is increasing the order limit from 10 per household to 25, according to the following message posted earlier this week on its Web site.

This is the second consecutive month the US Mint has increased the amount of coins the public can buy. In late July, the household limit was raised from one to ten. Prior to the change, coin sales had averaged to less than 1,000 new orders a week. The biggest excitement turned to watching realized prices of graded examples on the secondary market. (See current eBay auctions.)

Sales were obviously slowed by the household limit. By Aug. 16, UHR sales topped 80K, compared to the 70,385 sold as of July 19 and prior to the first limit increase. The following table highlights how demand picked up:

The gorgeous coin launched with great excitement on Jan. 22 and to exploding sales — despite the 1-coin limit and initial $1,189 price tag. 28,173 were purchased on day one, 40,727 by day four. The US Mint generated nearly $50 million in new sales during those first few days alone.

The 24-karat, .9999 fine gold piece is digitally reproduced from Augustus Saint-Gaudens’ original ultra high relief 1907 Double Eagle. Its smaller 27mm diameter makes it more than 50 percent thicker than modern US Mint gold coins. The UHR is limited to a single year of issue, and may be purchased from the US Mint here.

For reference, here is the exact UHR limit increase message as it appears on the opening store page of the US Mint Web site: