Marking the 300th Anniversary of a conflict that would shape the political structure of Europe for centuries, the Perth Mint has released the Battle of Poltava 1 oz Silver Bullion Coin. 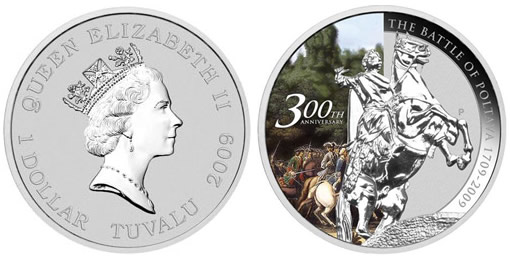 This battle was just one of many in the Great Northern War, and while not particularly academic in its strategies, the outcome would strip the power of one nation and initiated the growth of power of another.

Before 1709, Sweden was a dominant military force intent on conquest over Europe. Russia was just a pawn, easily overcome by the Swedish in earlier years and left to heal its wounds.

But Tsar Peter I of Russia was not content with just recovering, he wanted to retaliate. To this end, he spent the next several years turning his armies into a modern force, schooled in new tactics and armed with the latest weapons.

When Tsar Peter had the audacity to establish a new city called Saint Petersburg on Swedish lands, King Charles XII of Sweden decided it was time to march on Russia. On August 22, 1707, a force of 44,000 led by Charles started a slow march eastward.

Once they reached the Vistula River, they decided to hold position until it froze over. Finally, at the end of December, they crossed it and made their way to an area around Smorgon and Minsk where they made winter camp, which they stayed at until June. In search of supplies and reinforcements, Charles then led his forces south into Ukraine where he was joined by additional forces.

Even with reinforcements, Charles’ army dwindled from disease and starvation, combined with the effects of a harsh winter. But still intent on victory, the Swedish army started an assault on the fort of Poltava.

The Russians were ready for him, however, and the forces soon met. Left with only 14,000 men, Charles was extremely outnumbered by Peters forces which approached 45,000 strong. Finally, at 3:45 in the morning, the battle commenced on June 28th.

Initial attacks by the outnumbered Swedes were surprisingly positive, but by dawn, the tide was turning against them. The Russians started their own attacks, and soon were head to head with the skirmish line of the Swedes. Valiant as their attempts may have been, the Swedish numbers were just too few, and the Russians soon were surrounding them.

Seeing the eminent defeat of his men, Charles ordered a retreat and went south with the few men he had left. Tsar Peter was victorious and Charles was forced to live in exile from his own country for the next five years. 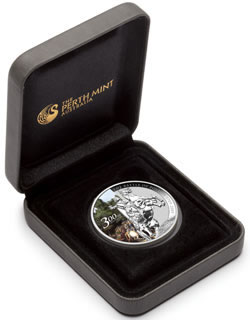 The Poltava coin is issued with a face value of $1 from the government of Tuvalu. As legal tender, the obverse contains Raphael Maklouf’s portrait of Queen Elizabeth II along with the inscriptions ‘Queen Elizabeth II,’ ‘1 Dollar,’ ‘Tuvalu’ and ‘2009.’

The reverse features a colorful image with a valiant Peter I on horseback. The inscriptions ‘The Battle of Poltava,’ ‘1709-2009’ and ‘300th Anniversary’ are also seen.

Presentation packaging along with a numbered certificate of authenticity will accompany the coin.