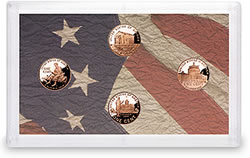 Not only are there four new one-cent reverse designs this year to celebrate the historical occasions, but there are four different 2009 proof set products that the US Mint has produced for coin collectors.

The proof sets offer varying coin denominations within each, and the included cents are special not just for their four designs but for their unique composition. Unlike the circulating varieties, each proof penny is struck from the same metals as the original 1909 Lincoln bronze cent — 95% copper, 5% tin and zinc.

So which proof set should set a collector buy? Based on US Mint sales figures for those that have already been released, many are buying them all. For clarity, here is a breakout showing the difference between each, the latest sales figures, and links for more information:

More information about the Lincoln cents may also be read via the following links: Lincoln 2009 pennies and Lincoln Cents.