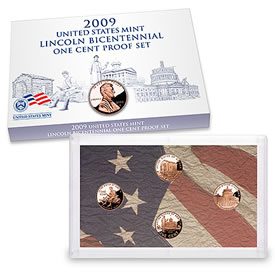 The proof sets are priced at $7.95 each, plus shipping and handling, and will be available at noon ET. There is a limit of 5 sets per household.

The one-cent coins celebrate the bicentennial of President Abraham Lincoln’s birth and the 100th anniversary of the first issuance of the Lincoln cent. The sets, therefore, are officially entitled as the 2009 Lincoln Bicentennial One Cent Proof Set.

The reverse of each cent bears a design that represents the four major aspects of Abraham Lincoln’s life:

The obverse or heads side of coins feature the familiar Victor D. Brenner designed likeness of President Lincoln that was first introduced in 1909.

"Proof coins are manufactured at the United States Mint at San Francisco using specially prepared, highly polished dies and are extraordinarily brilliant, with sharp relief and a mirror-like background," the US Mint explains.

"A frosted, sculpted foreground gives them a cameo effect. The coins are packaged in a protective lens to showcase and maintain their exceptional finish and are contained in a custom-designed box," it added.

Each coin bears the San Francisco "S" mint mark. In celebration of their 100th anniversary, and unlike the circulating versions, each is also composed of the exact metallic content as contained in the 1909 one-cent coin (95% copper, 5% tin and zinc).

The set may be ordered through the US Mint (http://usmint.gov/) online store at:

Collectors may also be interested in the 18-coin US Mint 2009 Proof Set, which the US Mint offers for $29.95 and launched on June 1. This annual set contains proof version of all US circulating change, to include the four bicentennial pennies. 956,581 of these sets have already been purchased as of August 16.

For a brief history about the one-cent coin or Lincoln 2009 cents, visit the CoinNews sister site: Lincoln Pennies.

Created by Congress in 1792, the United States Mint is the Nation’s sole manufacturer of legal tender coinage. Its primary mission is to produce an adequate volume of circulating coinage for the Nation to conduct its trade and commerce. The United States Mint also produces proof, uncirculated and commemorative coins; Congressional Gold Medals; and silver, gold and platinum bullion coins.