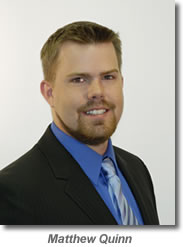 The announcement comes on the heels of Bowers and Merena’s highly successful Official Auction of the American Numismatic Association World’s Fair of Money in Los Angeles in early August, which presented more than 500 U.S. and world banknotes, including a Rare 1870 Fr. 1162 $100 California Gold Bank Note that realized an extraordinary $207,000.

"Matt is an ambitious young talent in the industry who takes his passion for collectible paper money with serious detail," said Steve Deeds, president of Bowers and Merena.

"He has been working closely with Bowers and Merena on several auctions in recent months and he will surely be a valuable asset to our company and our consignors."

Originally from New Hampshire, Quinn credits his initial passion for numismatics to his grandfather.

"He introduced me to coins at a young age and provided me with my first Whitman books," Quinn said.

He added that he first learned the intricacies of U.S. banknotes from veteran currency dealer Donald Severance, and was inspired to pursue a career in numismatics and banknotes by seasoned currency expert Peter Treglia, both of whom he worked closely with during his time at Spectrum Currency.

Quinn became fascinated with the auction process while at Spectrum Currency as he assisted Bowers and Merena, enjoying cataloging U.S. banknotes and later adding world banknotes to his repertoire with the recent acquisition of Ponterio and Associates.

"I’ve always strived to be the best I can be, and with numismatics you can never stop learning. I am really looking forward to this new direction and challenge," Quinn said.

For more information about director of currency auctions, Matthew Quinn, and Bowers and Merena’s Official Auction of the ANA Los Angeles World’s Fair of Money in August, call 800.458.4646.  For media inquiries, ask for President Steve Deeds. Complete prices realized for all past auctions are available at www.bowersandmerena.com.