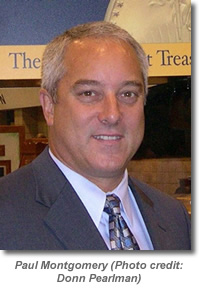 (Los Angeles, California) – Paul Montgomery is the new President of the Professional Numismatists Guild (PNG) for the 2009 – 2011term. His selection was made by the newly-elected PNG Board of Directors at a meeting in Los Angeles on August 3, 2009.

Under PNG Bylaws, members of the nonprofit organization elect nine board members at large, and then the elected board members select the officers.

Montgomery has served on the PNG Board since 1999 and was Vice President the past two years.

"During the next two years I want to continue expanding PNG’s presence in the marketplace and get out the word about the benefits of dealing with PNG members.  Guild members must adhere to high standards in the buying and selling of numismatic merchandise.  Collectors can have confidence when they deal with PNG members-dealers," Montgomery said.

Montgomery is President of Paul Montgomery and Associates of Houston, Texas. He is a former President of Bowers and Merena Galleries and Jefferson Coin and Bullion.  In recent months he provided expert work on behalf of the federal court-appointed receiver to investigate and make recommendations in the distribution of $27.5 million in inventory, clients’ accounts and assets of Stanford Coin and Bullion that were seized by federal authorities this past February.